For many people, Munich is a synonym of beer thanks in part to the Oktoberfest folk festival. It’s also a place where football is taken seriously, and the Football Club Bayern Munich (Fußball-Club Bayern München) is revered. Because of the importance that beer and football hold in our lives, Munich was an obligatory stop on our trip to  Switzerland and Germany. 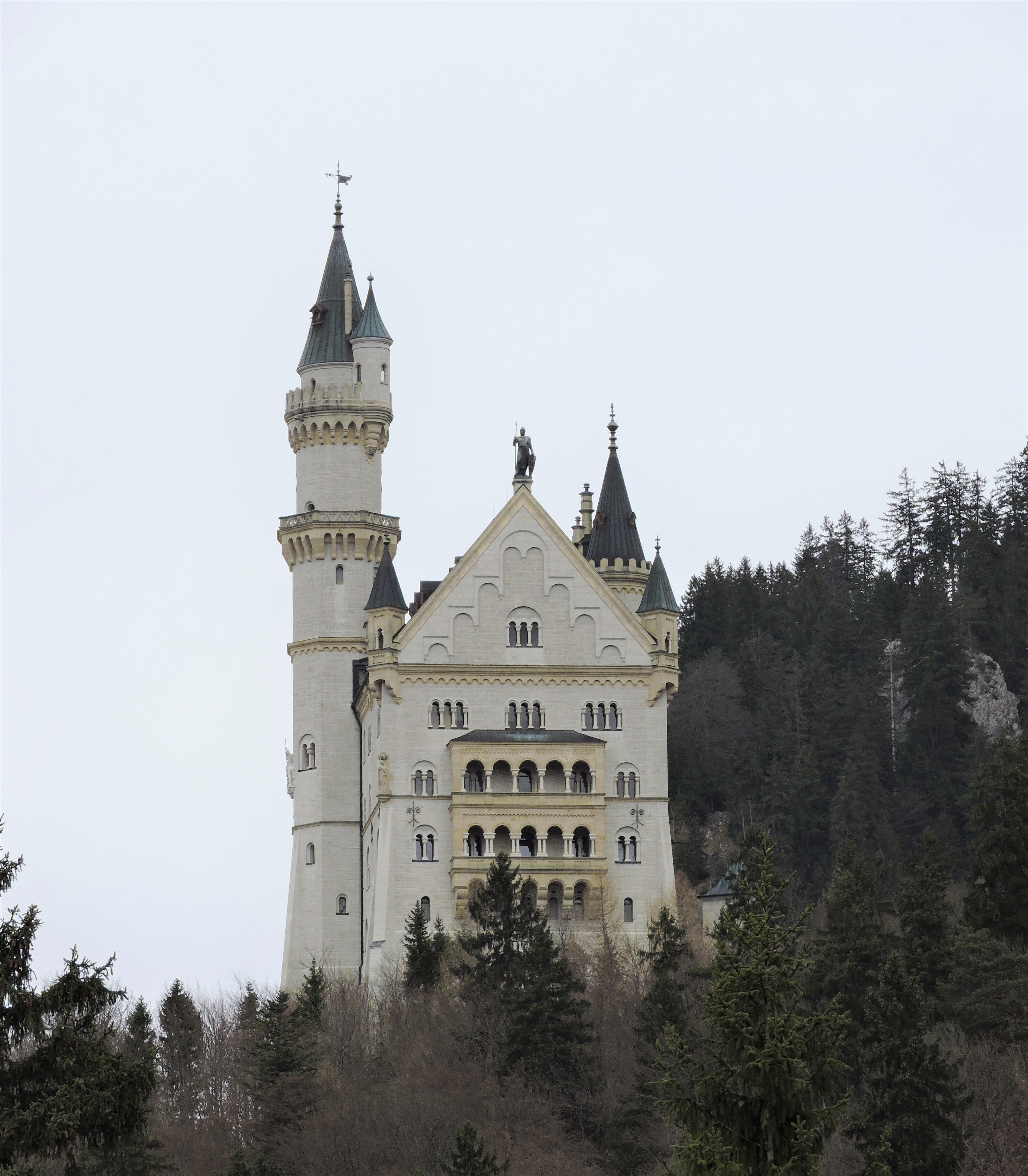 It takes about four hours to drive from Zurich to Munich, but we took a detour to pay a visit to the Neuschwanstein Castle in Schwangau (Germany), which added about two more hours to the trip. The route we took to the castle included roads that crossed through the Bavarian countryside. Sometimes narrow, at times full of curves, but always rewarding us with beautiful views. 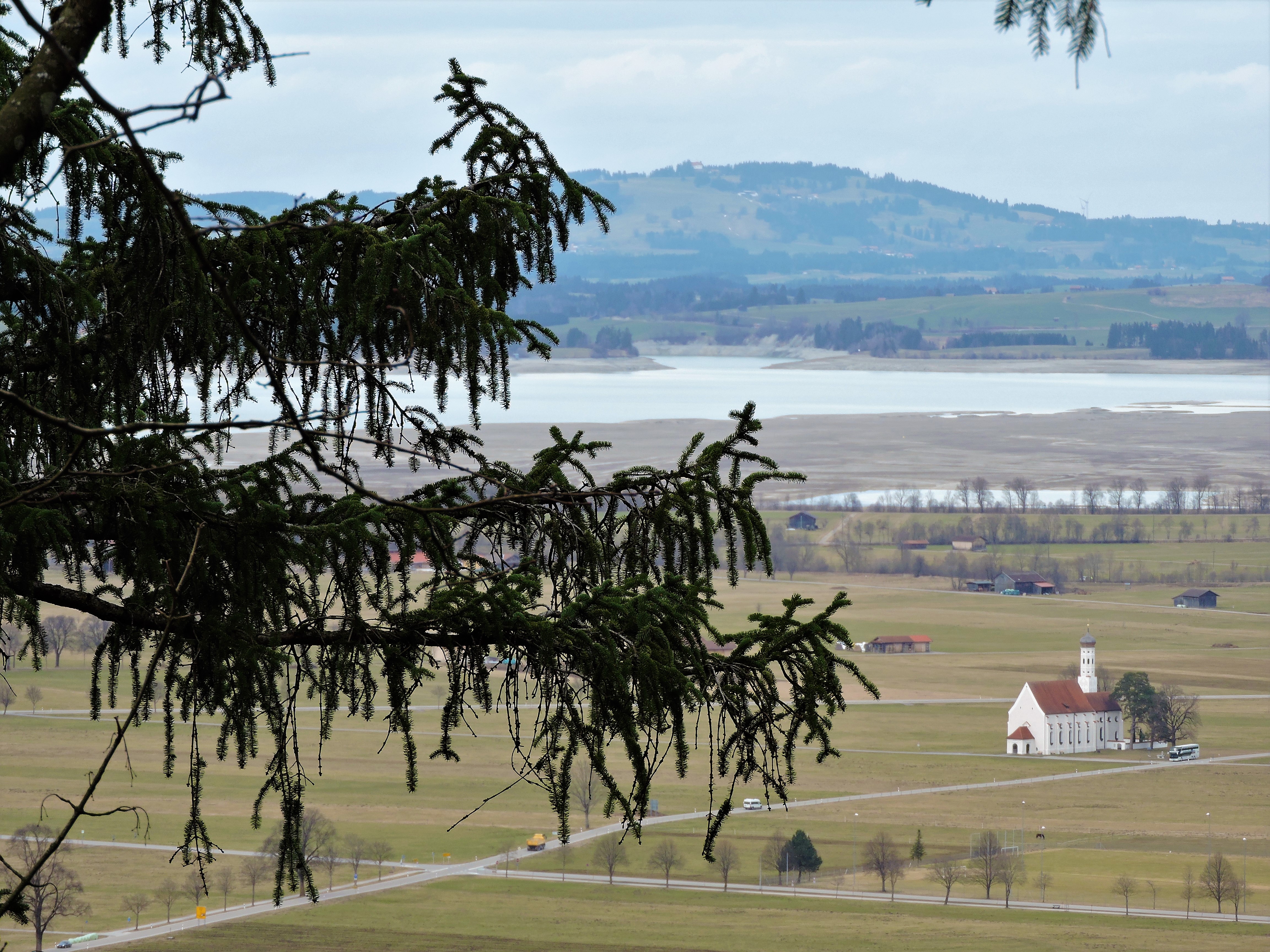 View of the Bavarian Countryside from the Neuschwanstein Castle

I remember seeing a sneak peek of the Neuschwanstein Castle as we started to get closer. I did not expect for it to be on the top of such a high mountain. How did they manage to build it there? How am I going to reach the top? I had read they had horse carriages that will take you to the top, but causing horses to get tired it’s not my thing. Before we parked the decision was made, we were going to hike.

If there’s something I have learned through the past years is that you should not trust people on the internet about how easy or hard it’s a hike. It all depends on the level of fitness of such person, and mine at that time was very close to none, so I will just say “not too comfortable, not too hard.” At least, the views were great, and they included the Hohenschwangau Castle, which is an older castle and the childhood home of King Ludwig II of Bavaria. 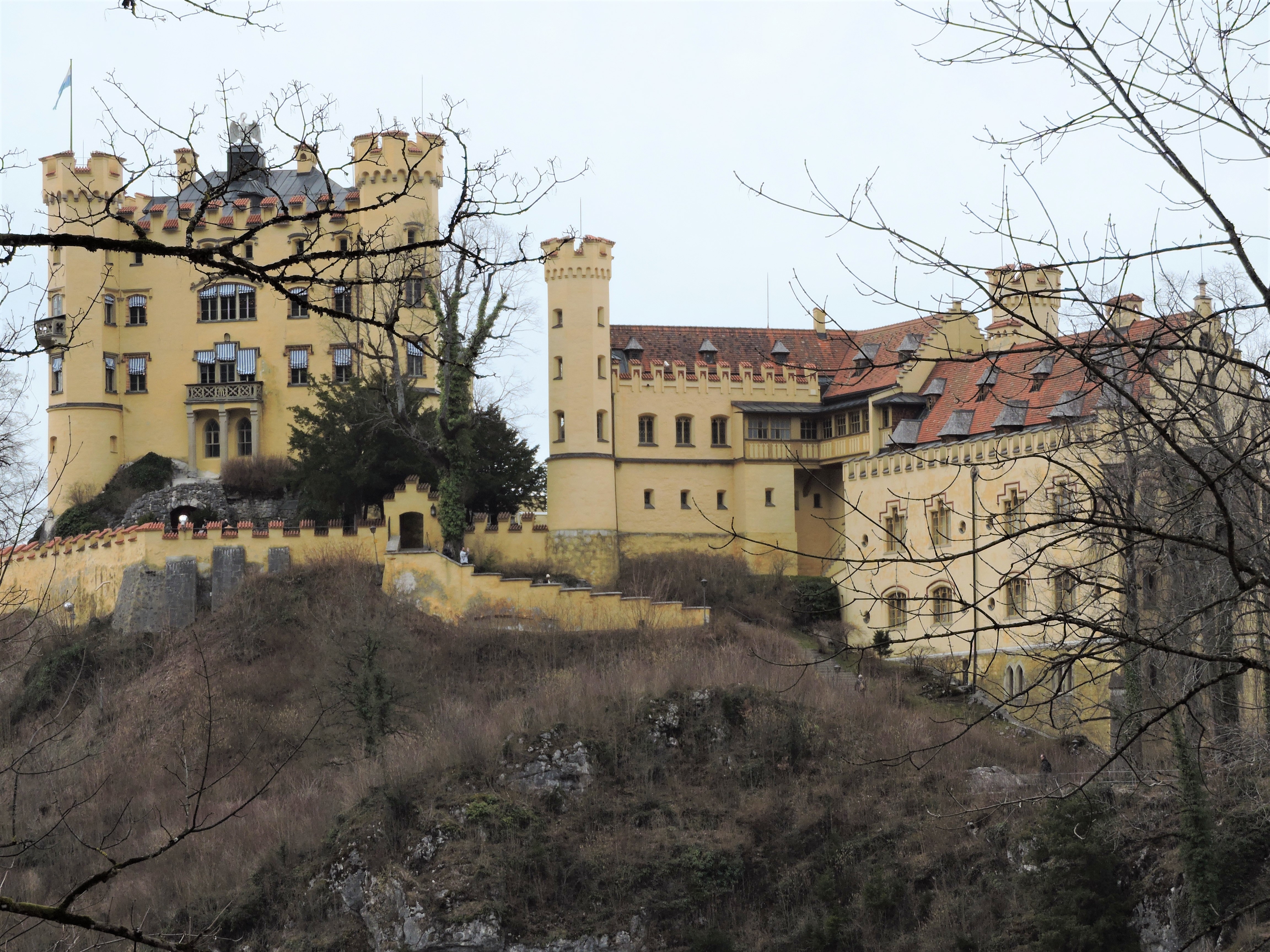 Hohenschwangau Castle
After finally reaching the top, we knew the hike had been worth it. The details on the castle are impressive, and you can appreciate its magnitude better if you are close. After seeing the Neuschwanstein Castle in person, it was confirmed to me why it was the inspiration for Disney’s Sleeping Beauty Castle. It is gorgeous and looks straight out of a fairytale. Be aware that the place might be packed if you go during high season. We visited during March, late in the afternoon and there were still big tour groups on the grounds. We did not have the time to see the interior of the castle, but I recommend booking the tour in advance if possible if you are interested. 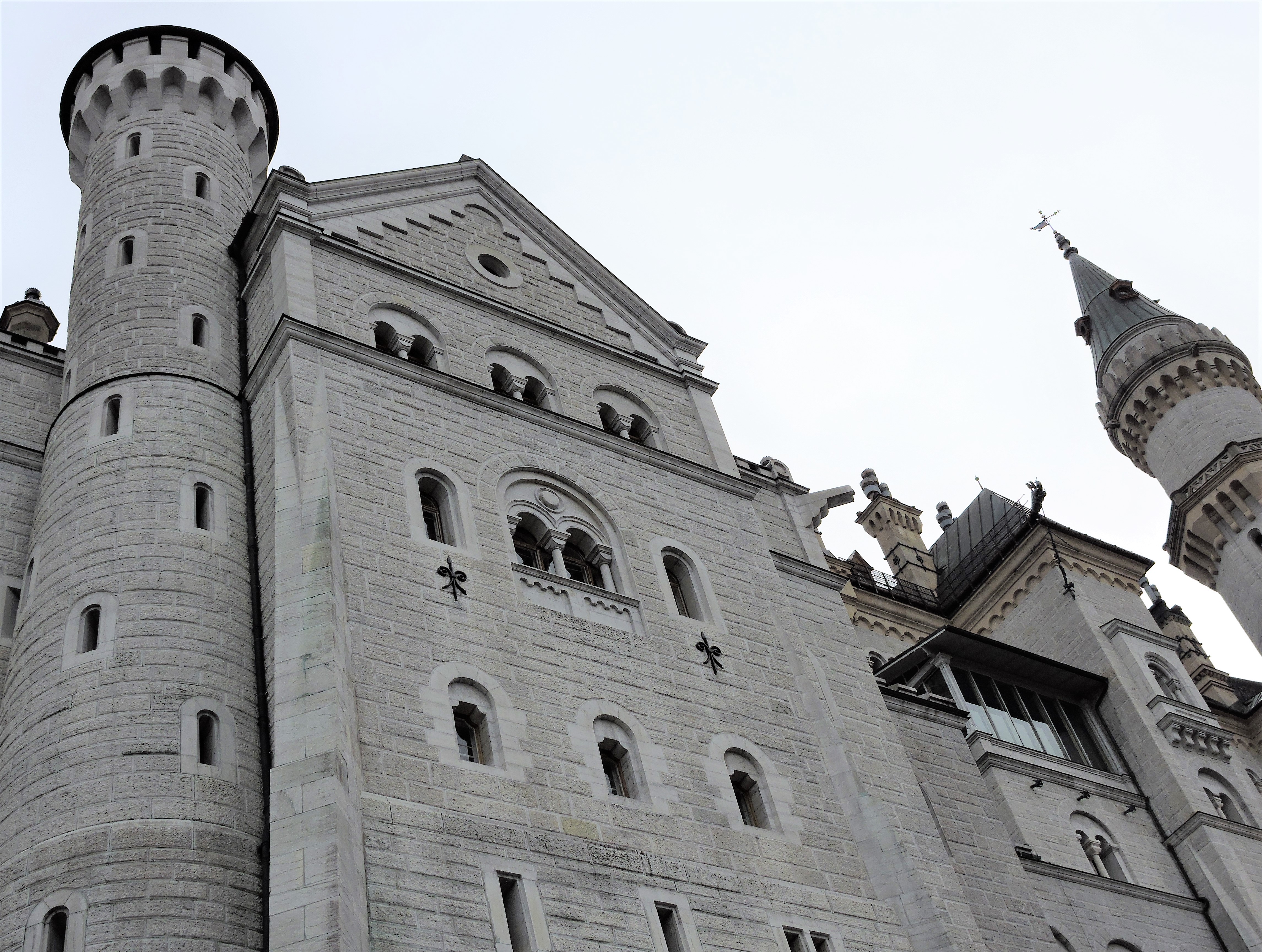 Close-up of the Neuschwanstein Castle

The same day we visited the Neuschwanstein Castle we had on our schedule a beer tour in Munich through SANDEMAN’s NEW Europe Tours. We arrived in Munich just in time, and after paying for the first time in my life to use a bathroom, I was ready to go. We met at the München Hauptbahnhof (Munich Central Train Station), where we introduced each other and started tasting delicious German Beer.
I won’t spoil the tour, in case you decide to book it, but if you are short on time and want to get a crash course in Munich Beer, this is your tour. Our guide Carlos was excellent. He was very knowledgeable and made us all feel comfortable. We were able to sample various types of beer, and then we had dinner (at an excellent price I must add!) at the Augustiner-Bräu. Augustiner-Bräu is Munich’s oldest independent brewery, and I can’t wait to visit it again.
After saying goodbye to our new friends from Brazil, Colombia, Argentina, LA, Ireland and South Korea we were ready to sleep. We stayed at Motel One Muenchen City Sued (Book it here!) in Munich. For the price we paid, we obtained a good clean room in a place full of amenities. There are a restaurant and bar on site with reasonable prices, good WiFi, hot water and an excellent breakfast.
I opened the windows before going to bed, and while feeling the chilly air that was coming from the outside, I couldn’t stop thinking I was able to cross two things off of my bucket list (seeing the Neuschwanstein Castle and tasting German beer in Germany) in the past twenty-four hours. 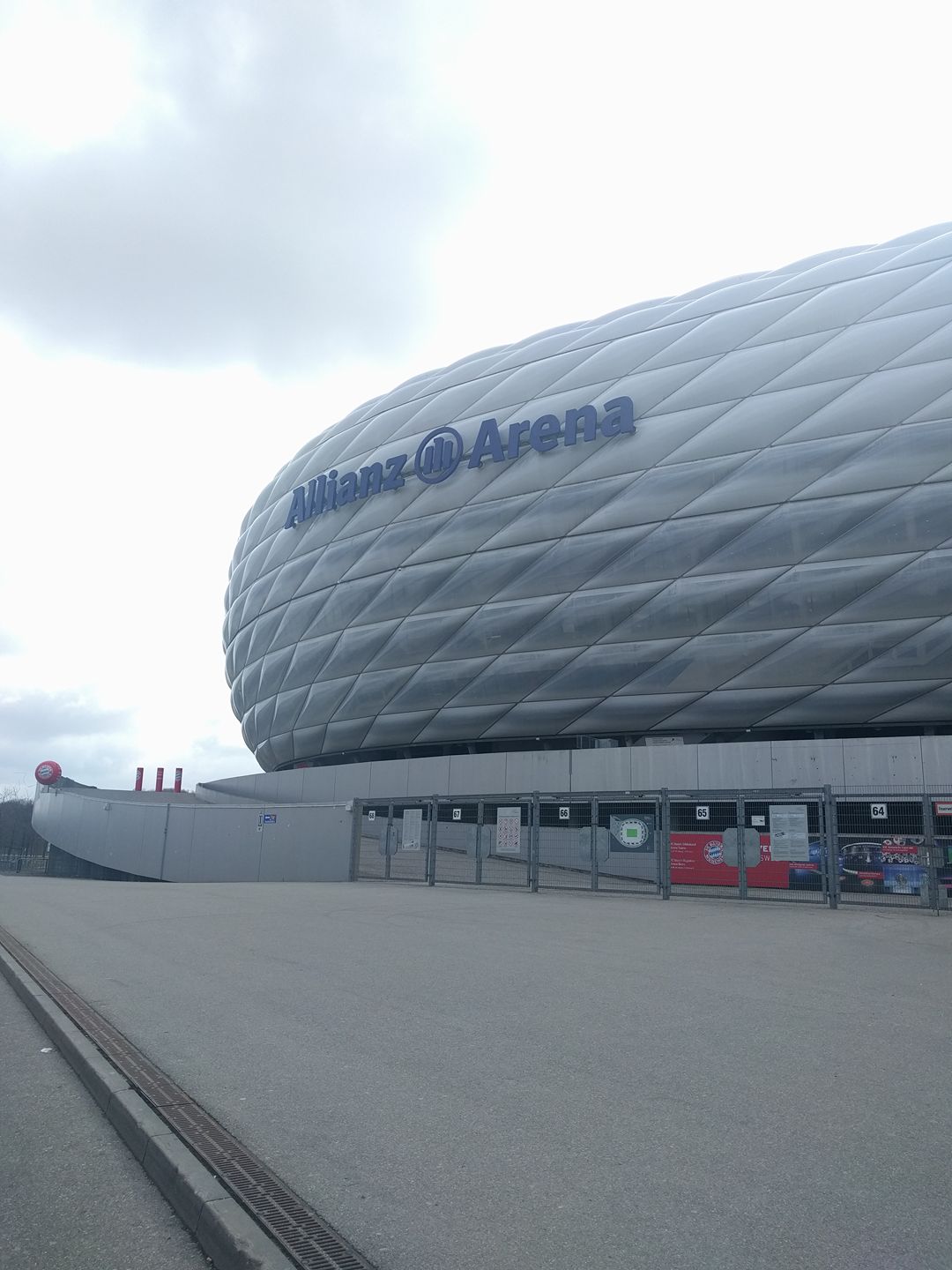 It was a new morning, and we were eager to start our next tour. We were visiting the Allianz Arena, home of the Football Club Bayern Munich. After trying to figure out where to park (the stadium and the parking are bigger than I had imagined), we finally arrived, and it was surreal. 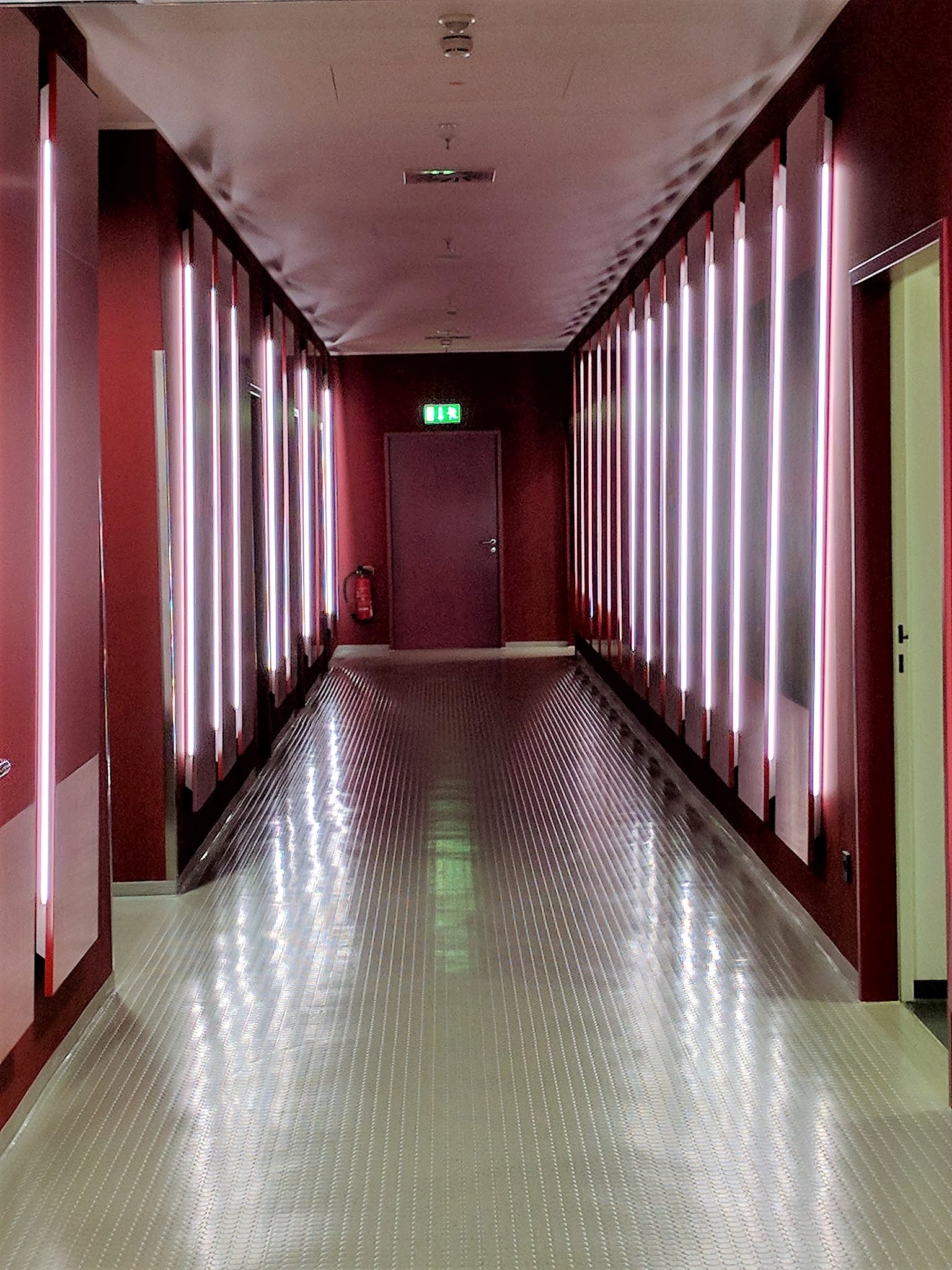 Hallway near Bayern Munich’s Team Changing Rooms
How many of our favorite players might have walked the same places we were walking on? How would it look on game day? I can only imagine the atmosphere in the stadium since our schedule didn’t align with a home game. 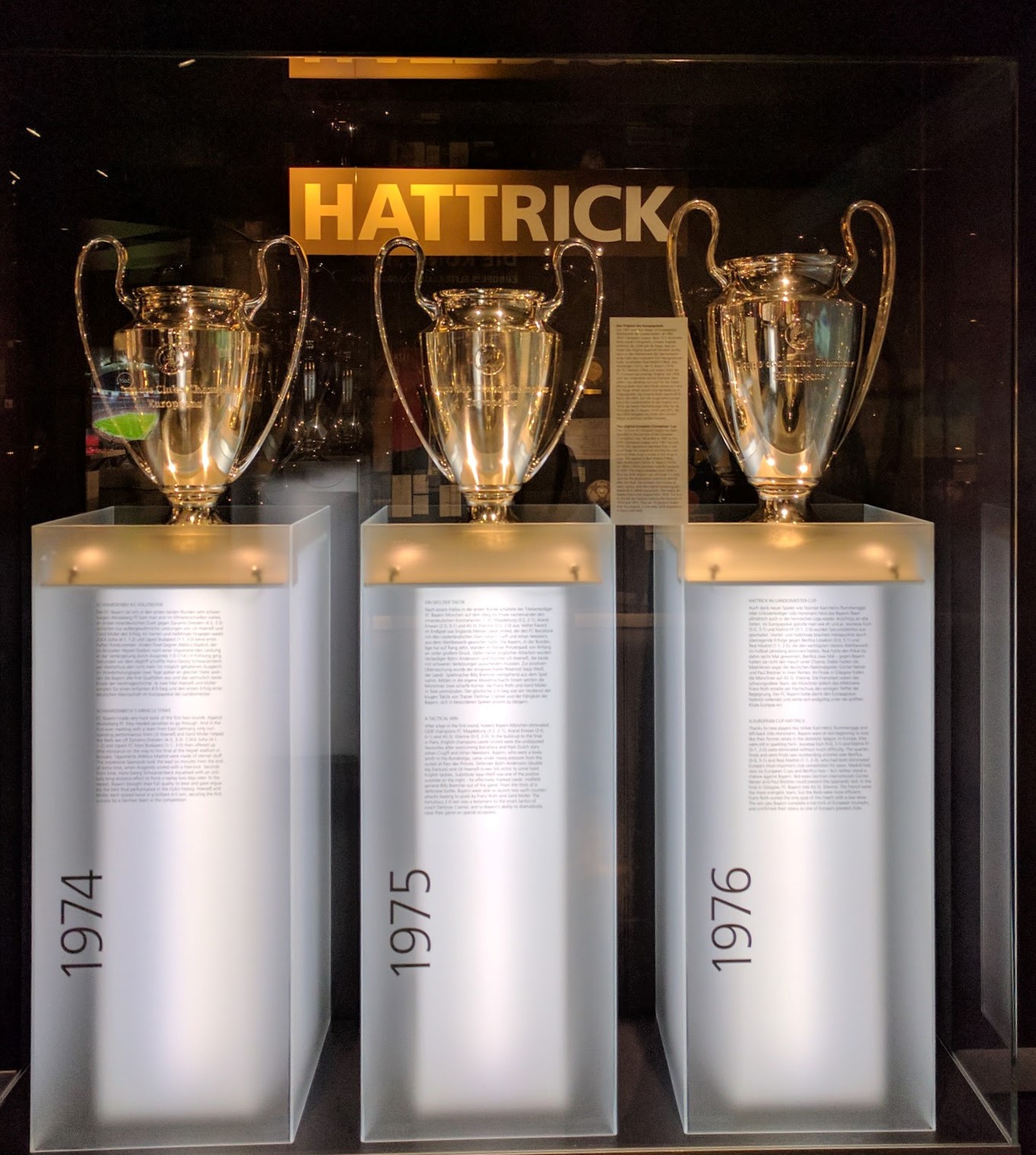 Champions League Trophies won three years in a row under the captaincy of Franz Beckenbauer
We first toured the Bayern Munich Museum (FC Bayern Erlebniswelt), which tells the story of the club and has pictures and memorabilia from the team including its numerous trophies. Then, we had a private stadium tour that included a visit to the changing rooms and other restricted areas. The tour guide was not only well informed but passionate and proud about the most successful club in German Football history. We finished the tour enjoying sausage and Spezi (Fanta and Coca-Cola) while preparing for our next stop.

It started hailing, and I was already thinking about how I was going to take pictures of the Marienplatz under those conditions. At the same time, I was enjoying it because hail is not something I encounter every day. To my surprise, it stopped in less than ten minutes, and we were on our way. 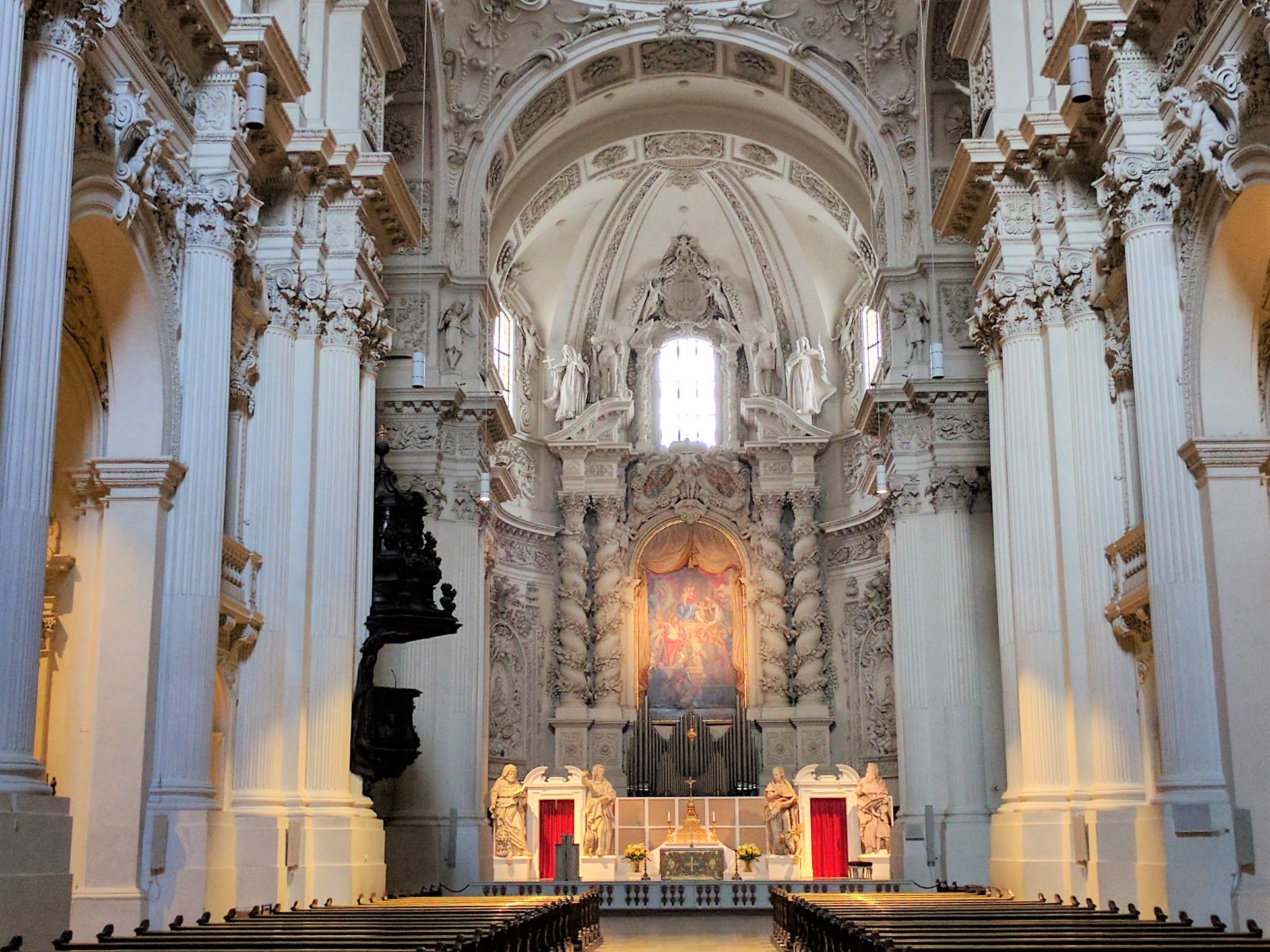 Theatine Church
We first visited the Theatine Church, a Catholic Church distinctive by its yellow coloring. Then, we came across with the Court Garden or Hofgarten which is a symmetry aficionado’s dream. 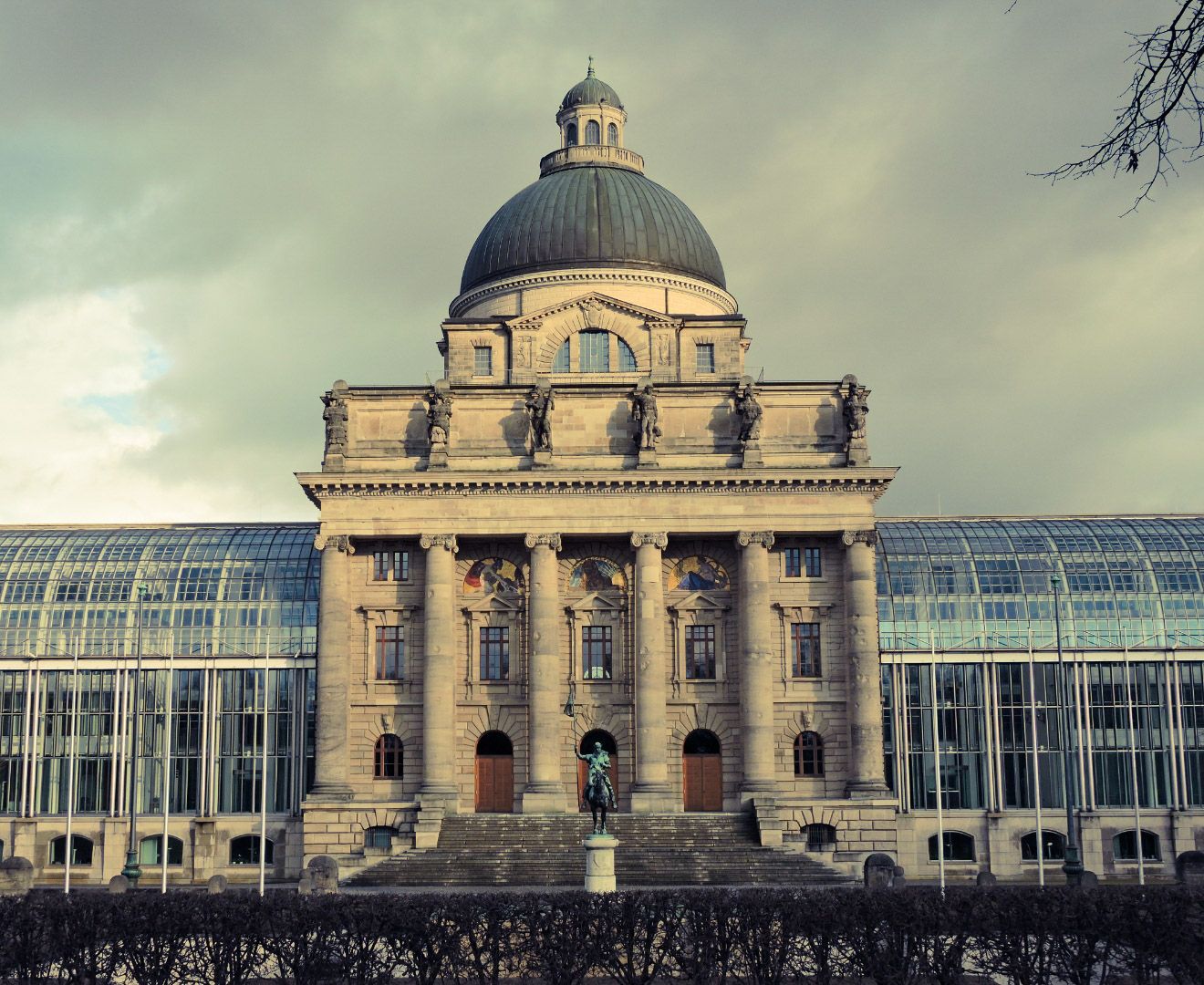 Bavarian Staatskanzlei (“State Chancellery”)
To end our visit, we finally reached Munich’s Marienplatz. The city’s main square is one of the most “touristy” areas of Munich, and this is where you can see the Glockenspiel in the tower of the new city hall. 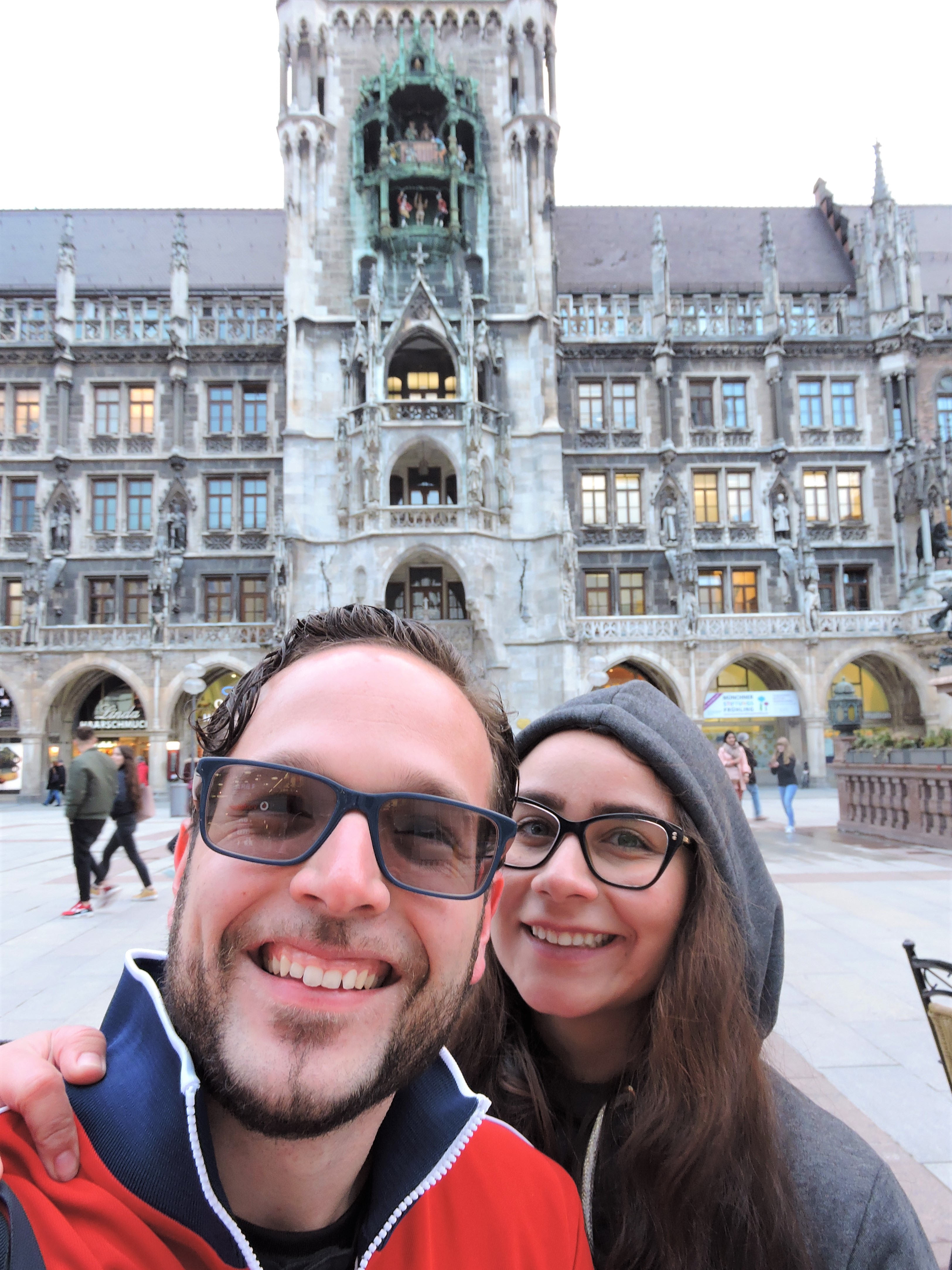 Obligatory selfie with the Glockenspiel in the background
Overall, what can I say about Munich? It is a big city, crowded but not until the point of being uncomfortable. Not picture perfect, but with enough beauty, beer, food, and history on its streets to enjoy it. With a mixture of business people, tourists, and students walking its streets and enjoying a coffee on a rainy afternoon. A place where I want to go back, and that cannot be missed on a visit to Germany.
Don’t Forget to Share It or Pin It! 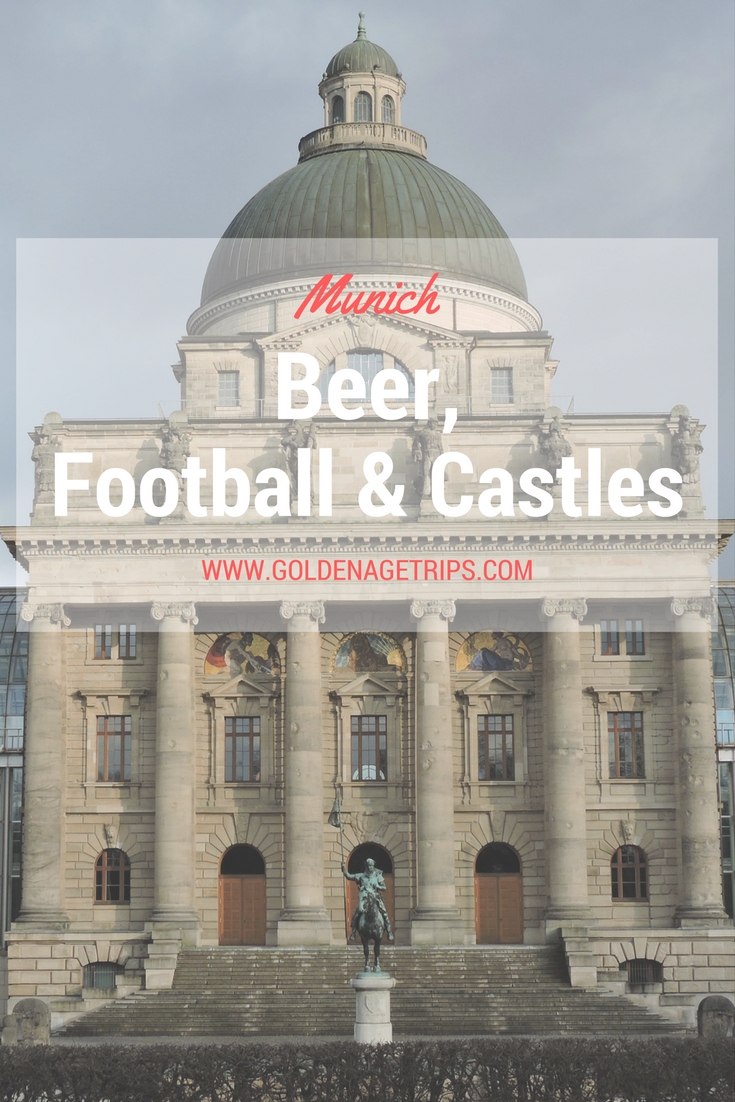