“I don’t know if we should go back.” I nervously told my husband, Héctor, after having just parked the car at the McIntosh Road Parking in Sarasota, part of the Legacy Trail. You see, I might have grown in the backwoods of an eastern town in Puerto Rico surrounded by wildlife, but none of that wildlife was poisonous. Here, less than five minutes into our planned walk, I had just spotted a southern black racer snake basking in a rare and cold Florida sun. 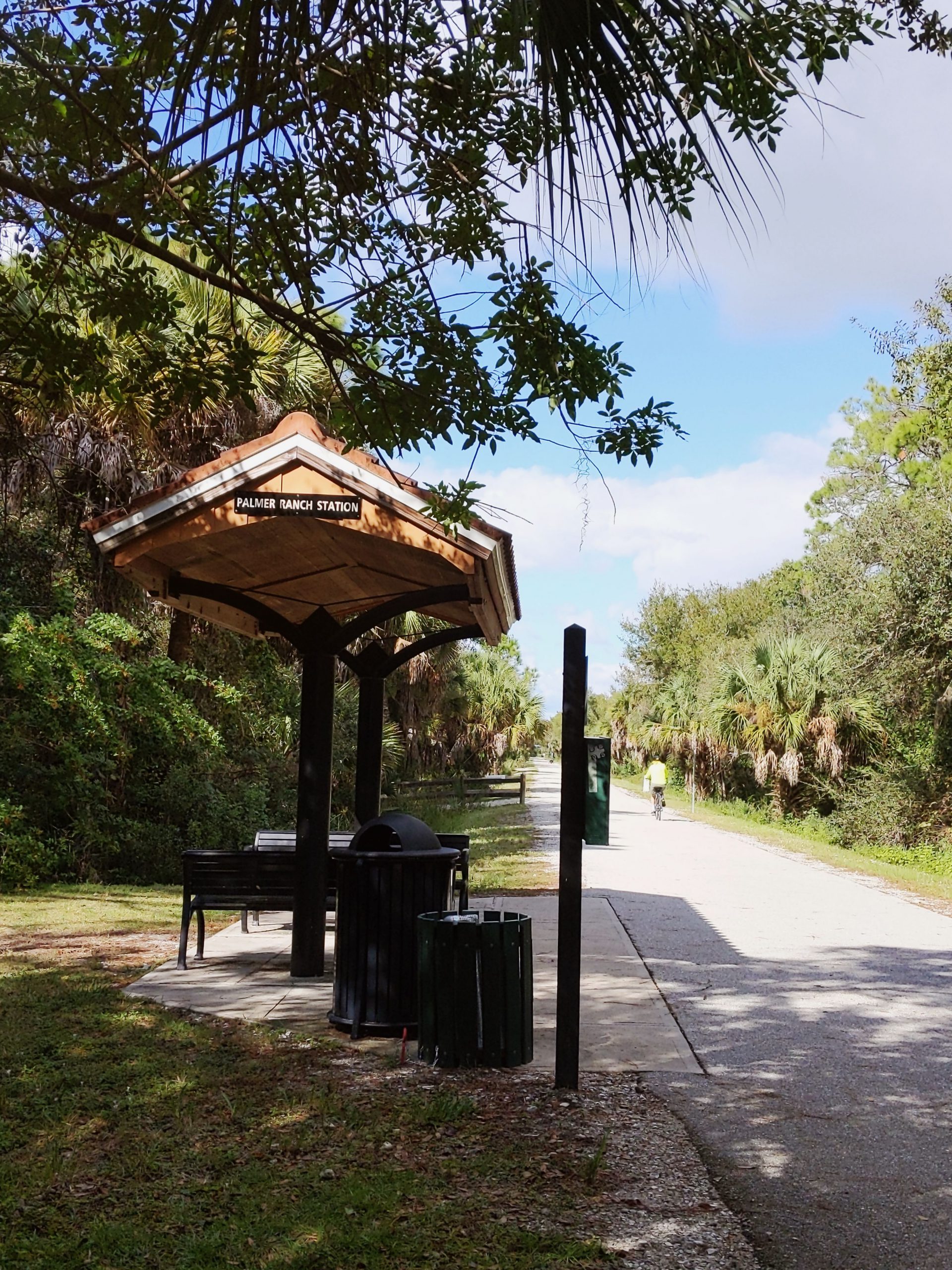 “It’s not poisonous,” I muttered to myself for reassurance while speeding up my walk and holding my breath.

Thankfully, in only a few steps, we arrived at the Palmer Ranch Station to a paved and open road where I could exhale and forget, at least for now, about the snake rhyme. Nonetheless, I began to understand why the Legacy Trail seems to be more popular with bikers than with walkers.

The Legacy Trail in Sarasota County spans (for now) almost 11 miles, and according to the Friends of the Legacy Trail, where the trail today is, a stretch of the Seaboard Air Line Railroad used to be in function between the 1910s and the early 1990s.

During these nine decades, these rails were transported from produce to minerals to vacationers to cadets. The tracks were also an essential part of the Barnum & Bailey Circus and its winter operations.

I only became aware of its existence because there was a citizen-amendment for a nine-mile extension on the November 2018 ballot. It passed by an overwhelming majority of 70.6% (which seldom happens), and I was intrigued. 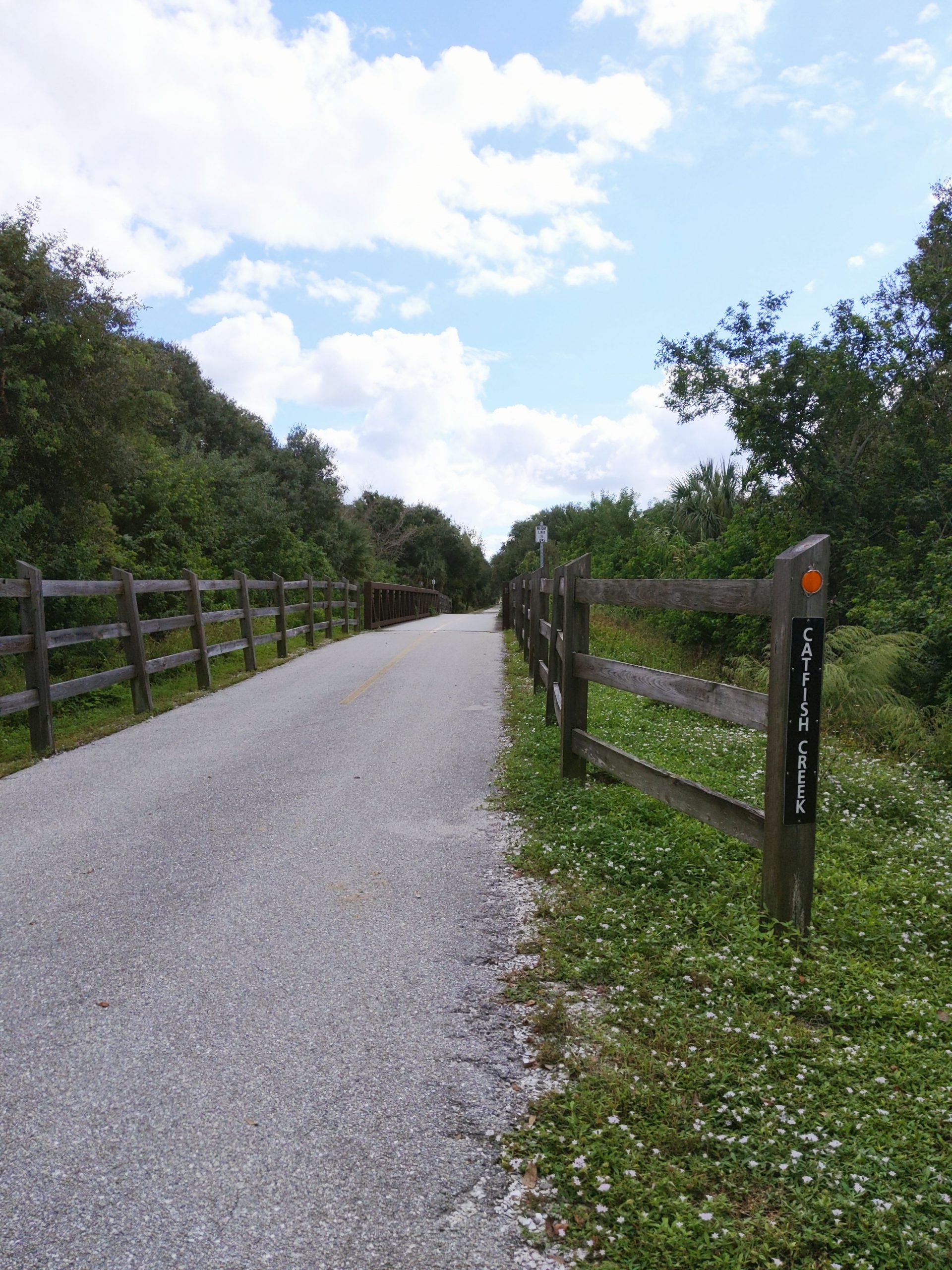 I had seen a few pictures online, but in person, it looked even better. A mostly even and flat surface, flanked by wildflowers, palms, and the occasional swamp. I had planned to walk, yet I felt the pavement was daring me to run. “This place is great for a run,” Héctor said. I was not the only one being tempted.

But, we did not run. We wanted to walk at least five or six miles, and we decided to save our energy. For the most part, the walk was quiet and positively uneventful. At times we would hear a cycling bell from a bicycle or only its spinning wheels. Even fewer were the times we heard or saw people walking or running. Only once we saw a group of what appeared to be Boy Scouts in one of the rest stops.

As clichéd as it sounds, walking along the trail makes it easy to be alone with your thoughts and also alone with nature.

The only times you are “thrown” on the busy Florida streets and at the noise that accompanies them is when you have to cross a street. Contrary to what’s typical in the area, there are marked crosswalks with warning light systems. Still, look both ways before crossing. 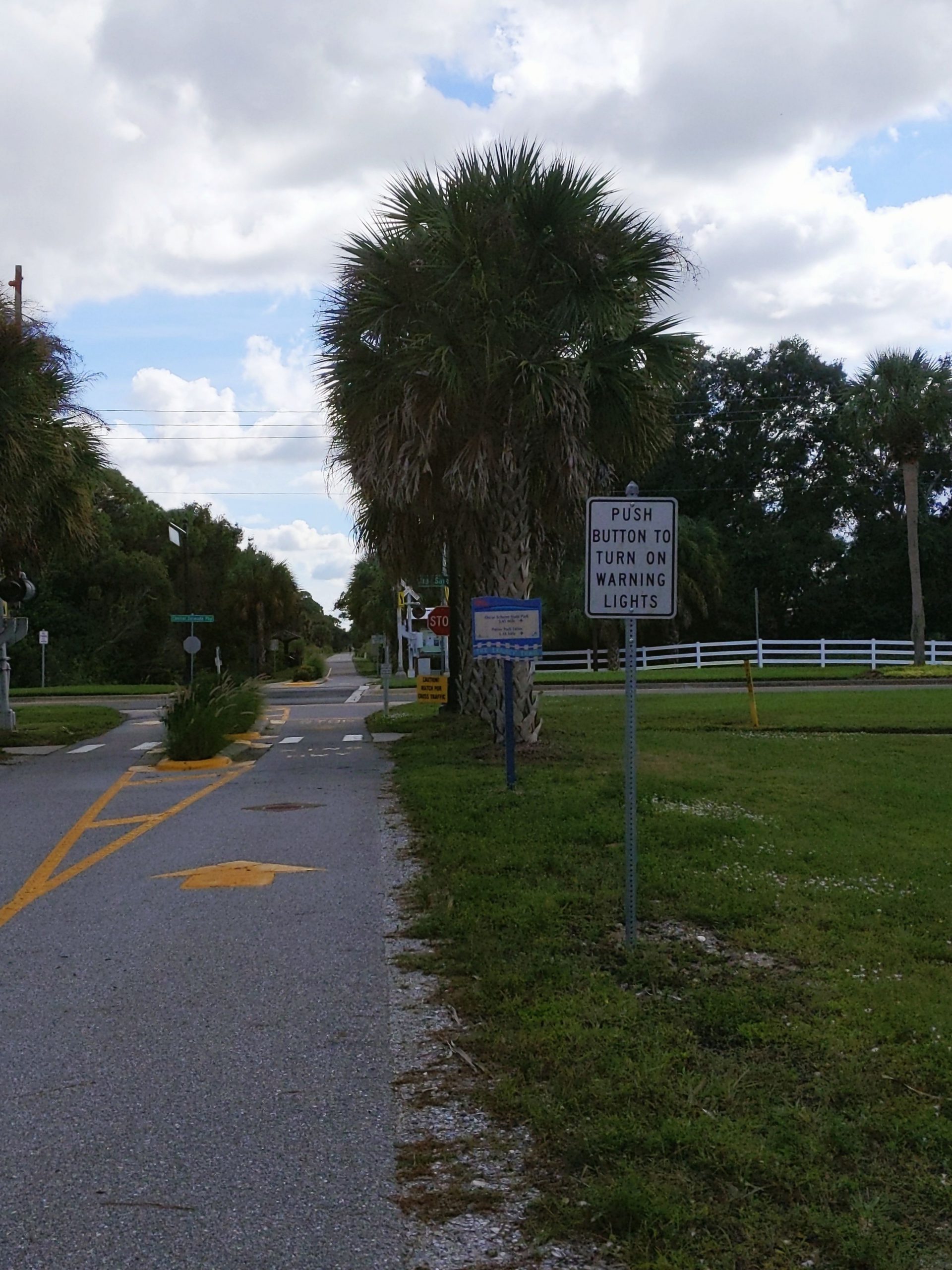 “We should probably head back.” I reluctantly said when we reached the trailhead at the Oscar Scherer State Park. There were mixed feelings. I would have liked to see more of the trail, but I knew I had to walk back the same distance I had already walked.

We were accompanied in our walk by an old guy with a cassette player on our way back. I would lie if I said I was not curious about what he was listening to. Whatever it was, it seems it was motivating him. The more we walked, the more difficult it was getting for us to keep up with him.

At one point, we stopped trying to play catch up, and that’s when I saw it — “a bald eagle!”. Not caring that thanks to conservation efforts, it has gotten more common to see them in the Sarasota area, I still get as excited watching the United States national bird as the first time I saw one. Sadly, I didn’t have my camera with me, and there are only sad attempts for pictures. 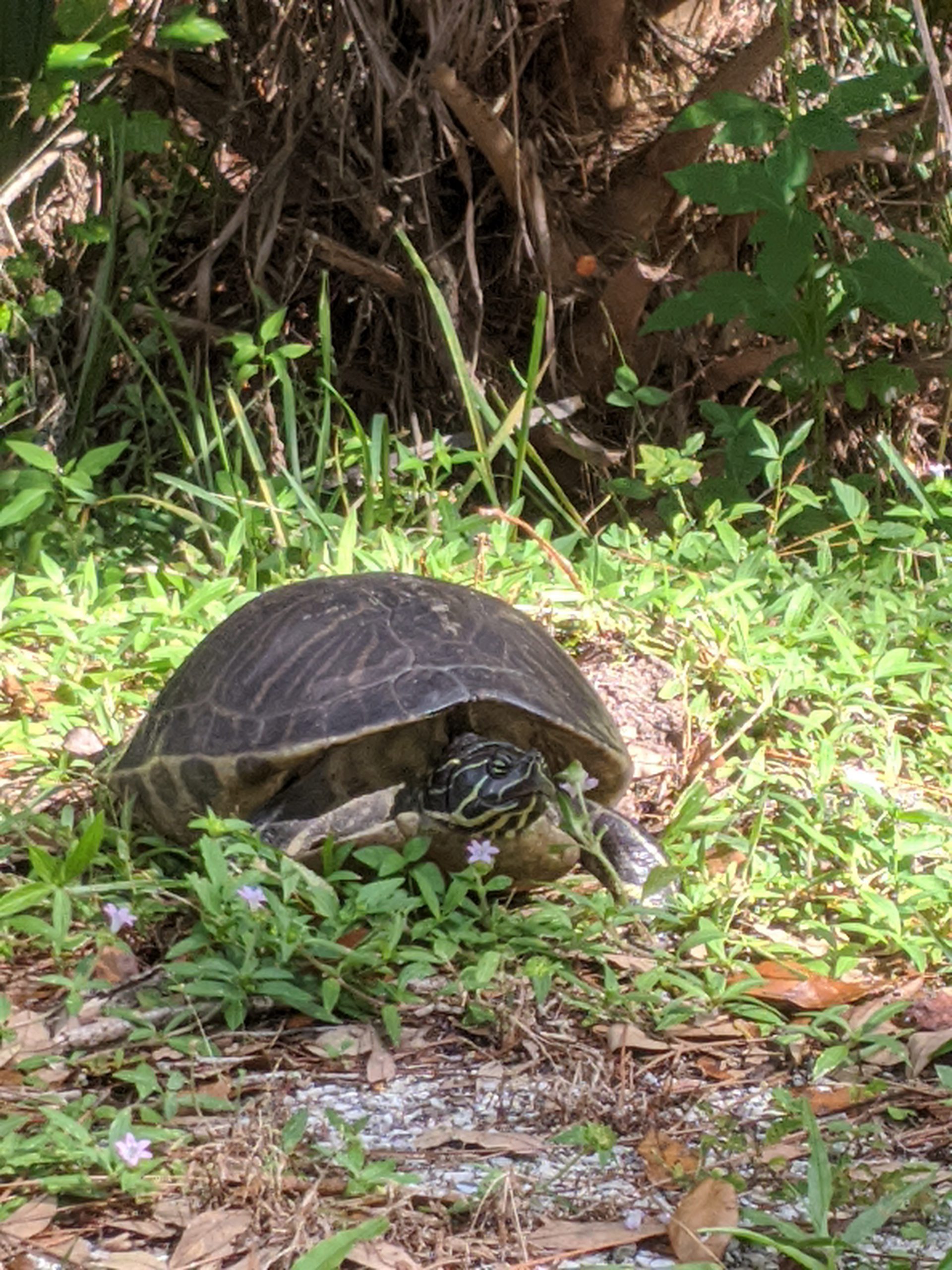 Aside from a few birds of the heron family, the southern black racer, and the bald eagle, the only other animal we spotted was a Florida box turtle.

The bird spotting gave us the energy we needed to get back to where we started. Now, I had to conquer my fears on the small path between the Legacy Trail and the parking. Though, this time the southern black racer was not going to catch me by surprise. “It’s not poisonous,” I muttered to myself while speeding up the walk. 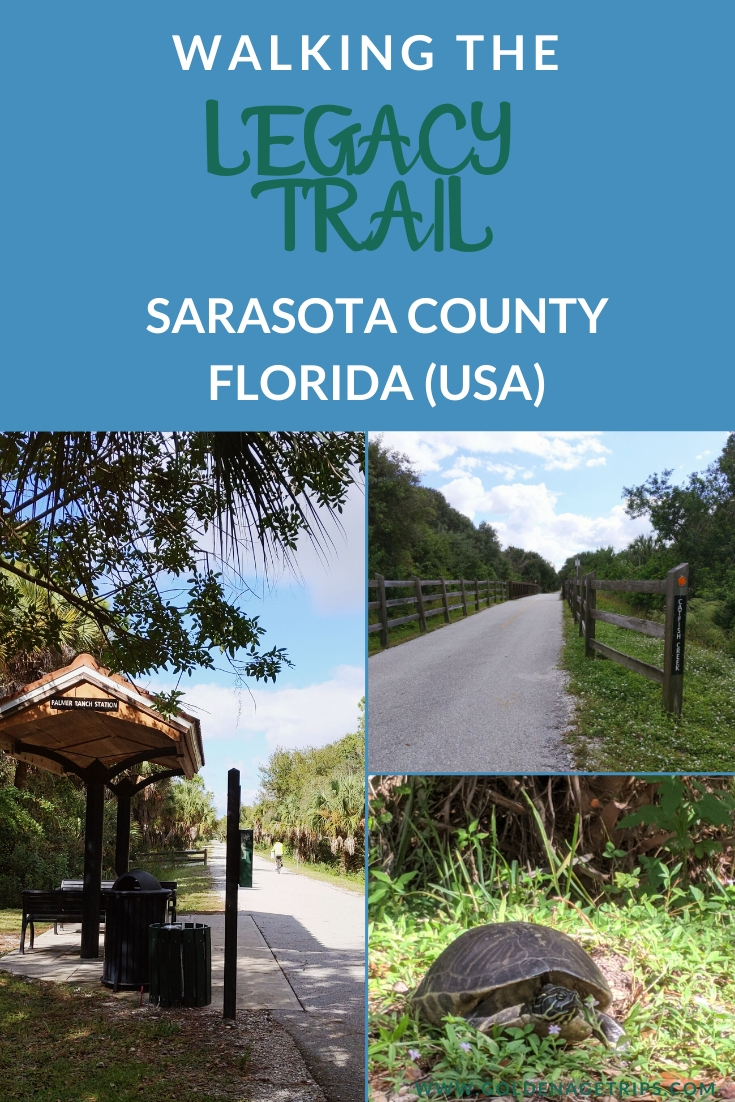