As soon as we landed at the Louisville Muhammad Ali International Airport, we started seeing advertisements for various distilleries. Airport storefronts were gleaming with bottles full of caramel-colored liquid. Yet, we didn’t need to be persuaded or enticed. We were in Louisville for one main reason, and that was for a taste of the Kentucky Bourbon Trail. 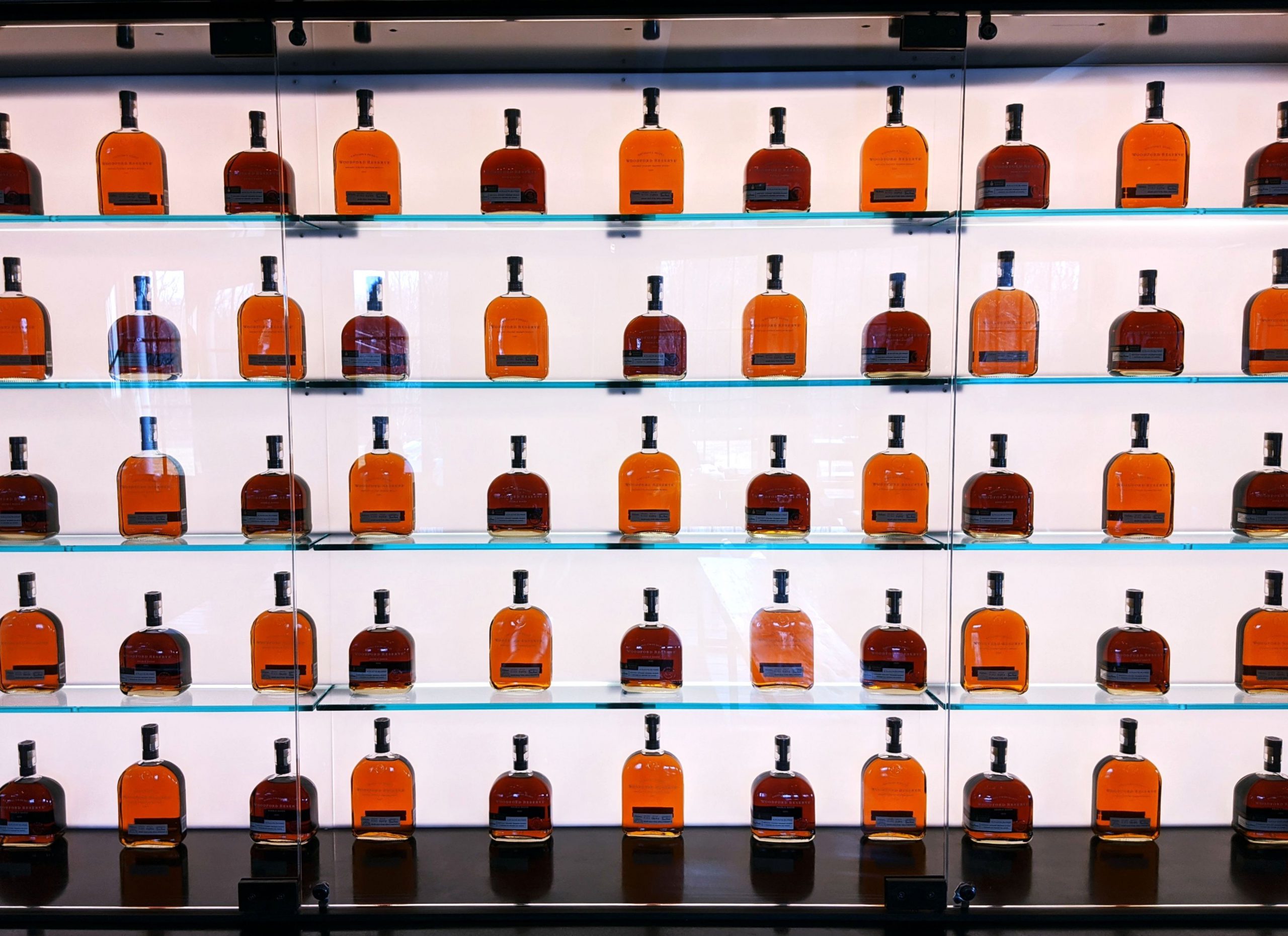 We arrived at noon on a Friday, after an almost two-hour flight from Tampa International Airport. The plan was to rent a car from Friday to Saturday and stay in Frankfort, Kentucky’s capital, for the night.

At first, three nights and four days appeared to be sufficient to explore Kentucky’s Bourbon Trail. The truth is, to keep ourselves relatively sober, and to be able to explore something else than distilleries in Louisville, we only visited four of the 18 distilleries on the bourbon trail.

We also visited two distilleries that aren’t listed on the official Kentucky Bourbon Trail, but that in no way are less in any sense than those that are.

The following is a recap (avoiding to regurgitate the tour) of those distilleries visited, what makes them unique, what you need to know before you go, and where to stay and eat if exploring Frankfort and Louisville, KY.

But before, a quick introduction to what can be called bourbon: 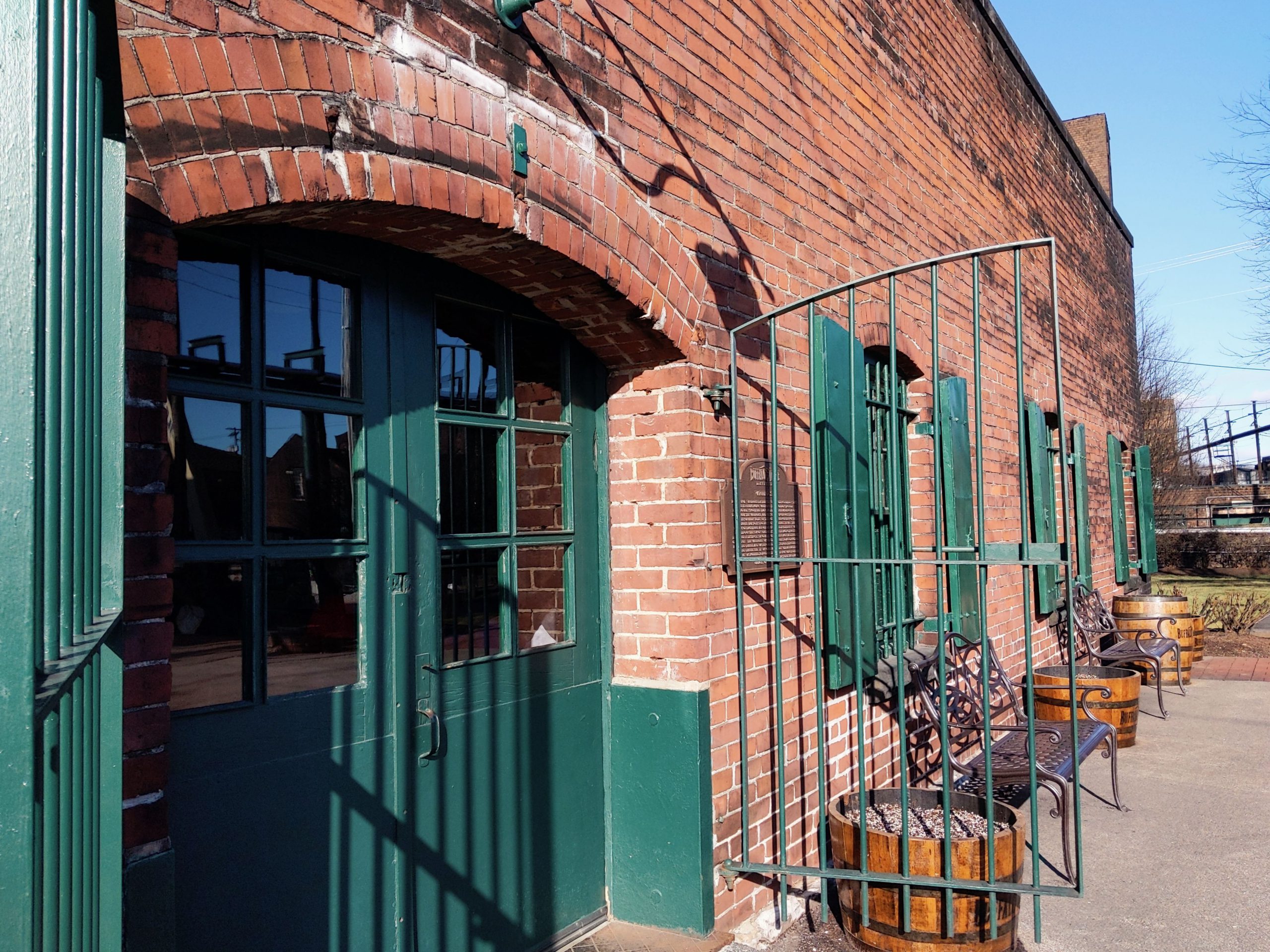 We took part in The Trace Tour, a one-hour complimentary tour offered seven days a week (always check the official distilleries websites for the most accurate information regarding dates and hours).

Here, Alice (our guide) took our group for a walk and talked about the history and products of Buffalo Trace. She also mentioned how the facility is undergoing an expansion of 1.2 Billion Dollars pledged by Sazerac, its parent company.

Under a bright but chilly day and the smell of cooked mash, Alice also explained to the tough crowd the differences between the warehouses (known as rickhouses because they are aging Whiskey). Additionally, we had the opportunity to visit one of the rickhouses where humidity and the smell of Whiskey teems. 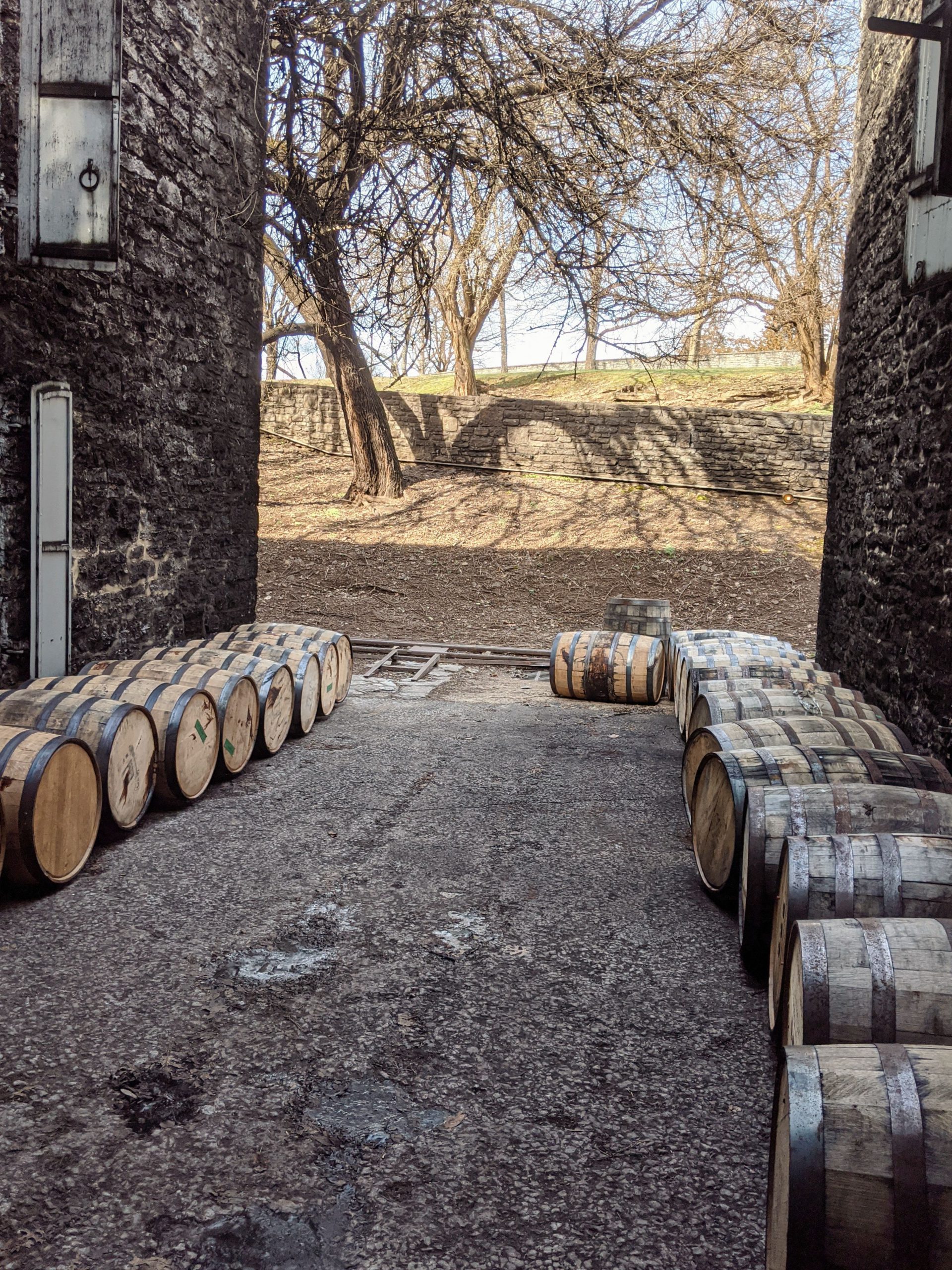 On a Saturday morning, right after breakfast, we drove to the Woodford Reserve Distillery. A quick but lovely ride through Kentucky’s horse country.

This was the drive to the @WoodfordReserve Distillery in Versailles, KY. Wasn’t it nice? pic.twitter.com/oAydH5z1zt

We arrived at the Welcome Center to check-in for the tour, which I recommend you reserve in advance. Then, after being called by the guide, we hopped on a shuttle bus to cross the street and go to the actual distillery.

Here, guests appeared to be in a better mood than in Buffalo Trace, if I have to guess why the difference, probably because of the milder weather.

An overpowering corn smell hit our nose after getting out of the shuttle bus and entering the first building. In this structure, there were vats with mash at different stages of fermentation that we were allowed to taste.

Then, came the gasps. We had entered the still room. One of the most impressive still rooms I have seen in the United States, with its three larger than life copper stills flanking one of the room sides. I haven’t been that impressed about a still room since visiting the Jameson Distillery in Midleton Ireland.

Furthermore, it is interesting to know that according to our guide, it wasn’t until the Bourbon Boom of the 90’s that the facilities of Woodford Reserve Distillery started to get upgraded. In her words, the place was “rundown.”

There was also a visit to one of the rickhouses, where a strong bourbon smell and the clickity-clack of the pipes envelope the white oak barrels until they are ready.

Before getting back on the shuttle bus, the tour guide stated (the only distillery that did) how we cannot forget the enslaved people that are also part of the history of American Whiskey. Much information was not provided, except that at some point, there were enslaved people working the property. However, to learn more, the article Slavery in American Whiskey by Fred Minnick is a good start.

Already in Downtown Louisville, in the street known as Whiskey Row, we checked in for our Inside the Barrel tour. This tour includes the Signature Tour basics but focuses on the secondary barrels and the finishing process of the product.

First, you’ll learn that Angel’s Envy Distillery is a family enterprise. With the son, and three grandsons of Lincoln Henderson (its founder) working on the distillery.

Then you’ll see that by produced volume, it is almost a craft distillery. Its size is considerably smaller compared with other distilleries such as Buffalo Trace or Woodford Reserve. Nonetheless, it is still larger than expected when you remember you are in Downtown Louisville.

There are no rickhouses because that would be a fire hazard. But they do the second finishing on-site. It was interesting to see the Port and Rum Barrels, which looked straight out of a Pirate Ship.

Most tours include a bourbon ball with their whiskey samples, but the best chocolate pairing hands down was the one provided at the Angel’s Envy Distillery. Here, they had two chocolates from Art Eatables, and the chocolate orange Chimeres were not only outstanding by themselves, but also with the Whiskey. 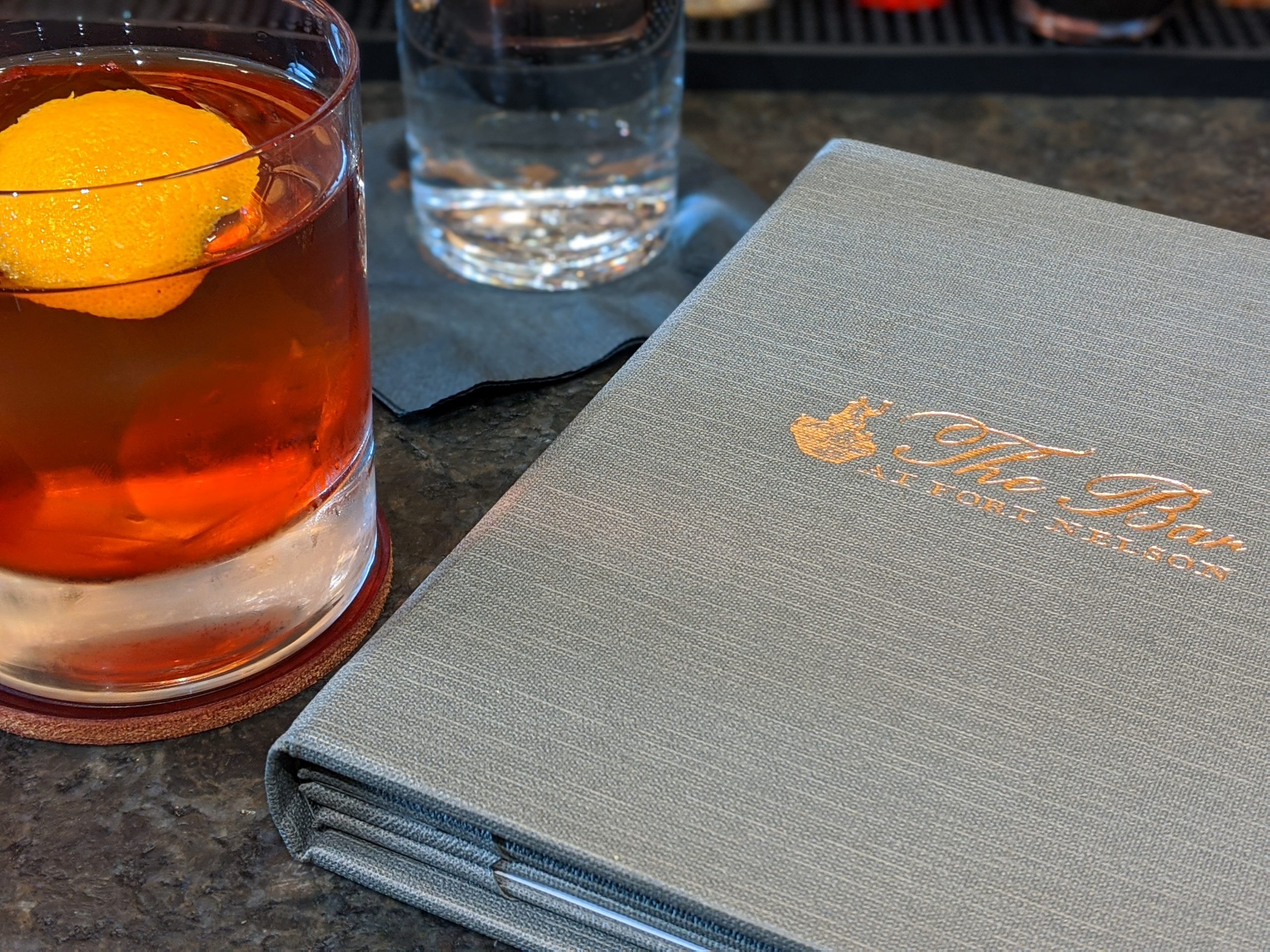 The Boulevardier (A Negroni, but substitute Gin with Bourbon) at The Bar at Fort Nelson 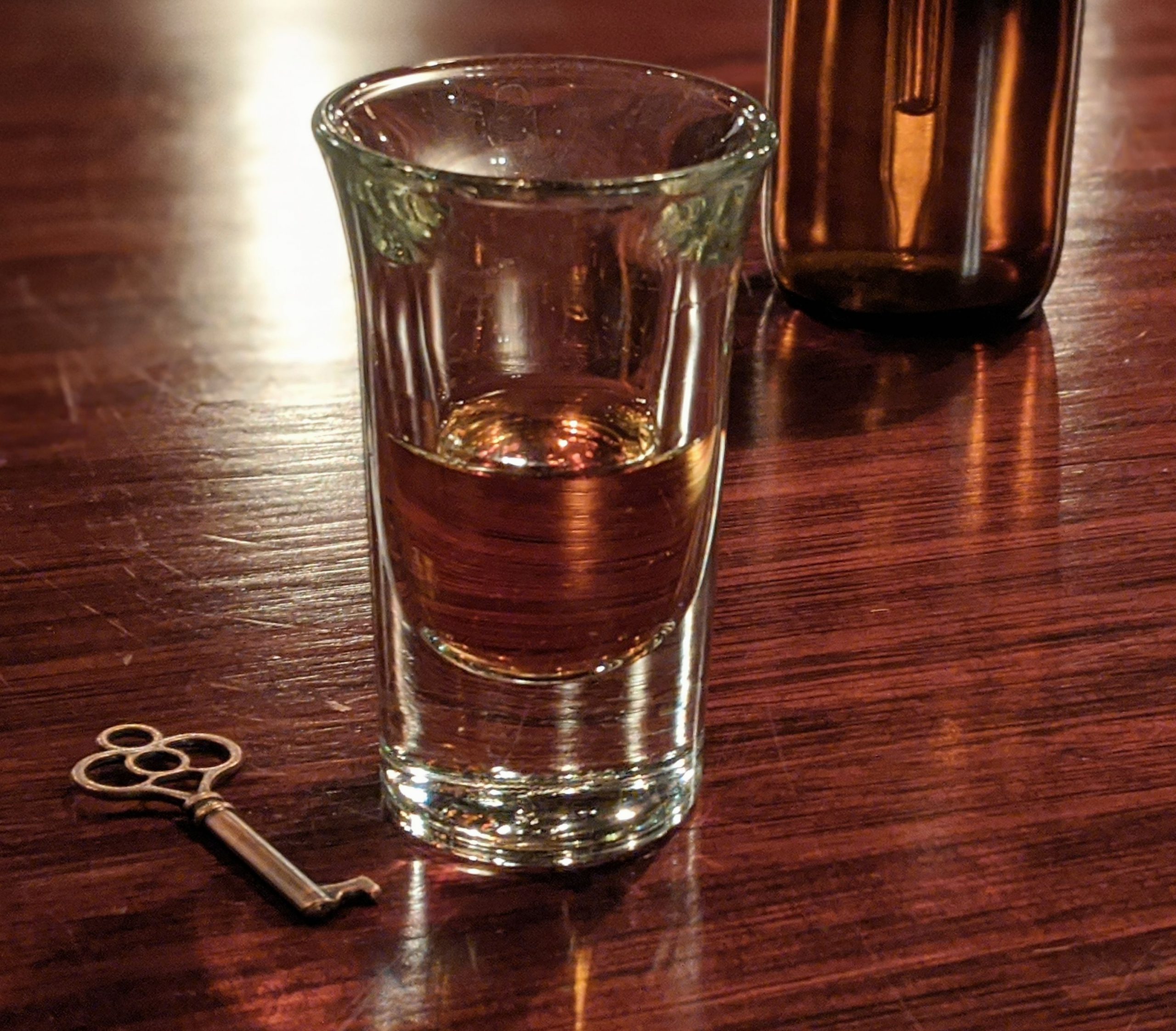 At the Evan Williams Experience, we chose to do the Speakeasy Tasting Experience. This experience does not include a tour through production or bottling, and as you can guess by the name, a speakeasy is involved.

I don’t want to spoil the experience for you if you decide to go, but I can tell you that it was entertaining, informative, and fun. It also includes a souvenir.

Here, aside from Evan Williams Bourbon (including barrel strength), we sampled the Evan Williams 12-year Bourbon, which can only be purchased at the Kentucky gift shop or Japan. People in Kentucky say the best bourbon is the one you like the most, and I had to say for me this was it. 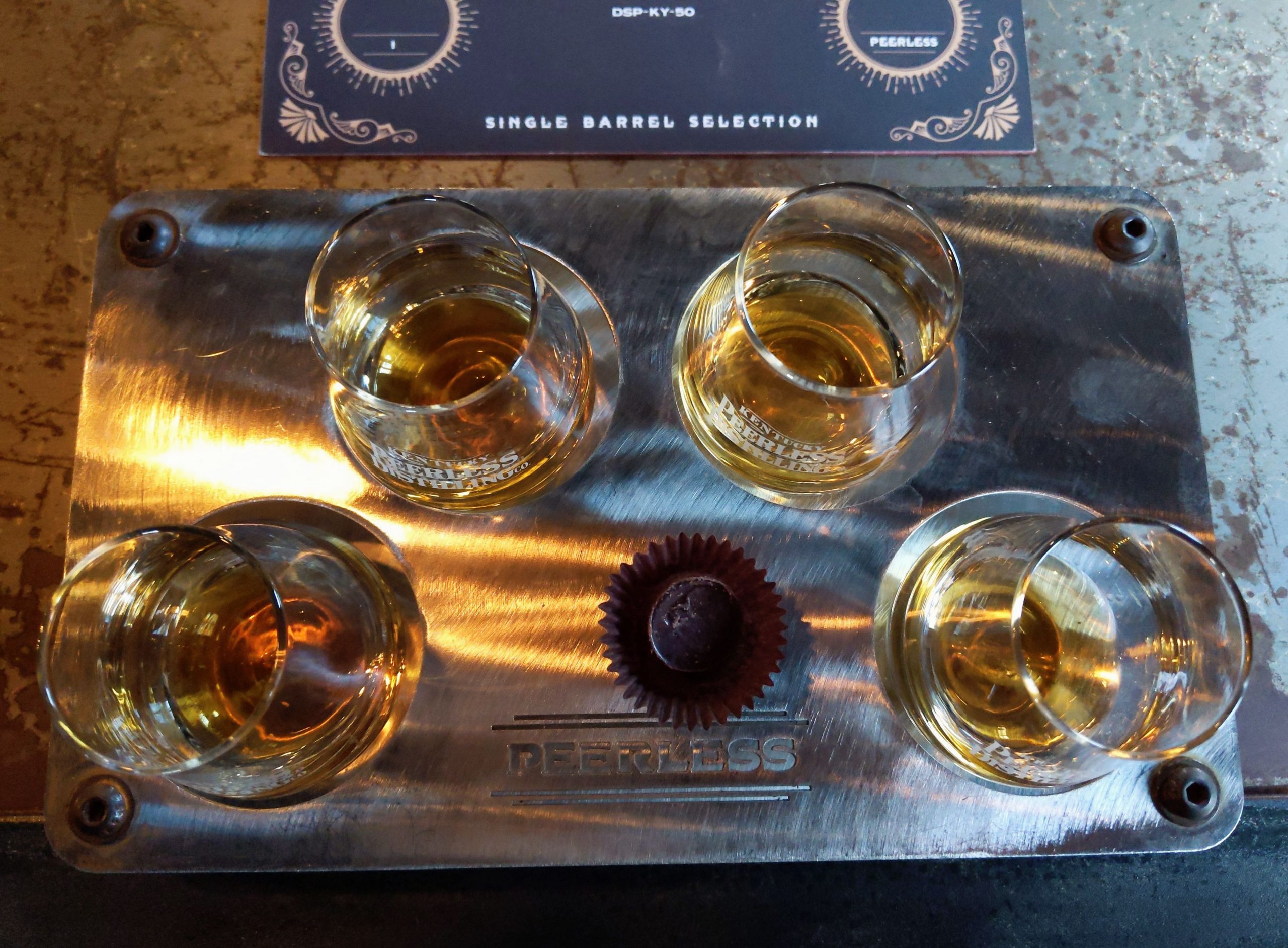 Our flight was leaving Monday afternoon, so we were able to squeeze one more distillery on Monday morning. This distillery was craft distillery Peerless Distilling.

Peerless Distillery history starts in Henderson County, Kentucky, and you’ll learn in the tour how history is being made in Downtown Louisville.

You’ll also discover how the distillery carries and proudly displays the DSP-KY-50 (Distilled Spirits Plant Number) number when the distillery opened in 2015.

At this place, everyone seems to be enjoying what they do. They’re also more than willing to answer your questions and show you things you don’t typically see in other distilleries tour.

I’ll never forget seeing our tour guide opening and dumping a barrel that’ll be sold as “Single Barrel Bourbon.” It is also not every day that a Master Distiller (Caleb Kilburn) stops to asks us how we like the tour and engaging and answering questions from the group.

Barrel Dump @kypeerless. First time I’ve seen one! Thanks for letting our tour group be part of it. pic.twitter.com/n4w1t9BUr3

The samples offered at the end of the tour were from Single Barrel Bourbons and Single Barrel Rye (which Hector says is the best rye he has tasted) that are only available at the distillery. 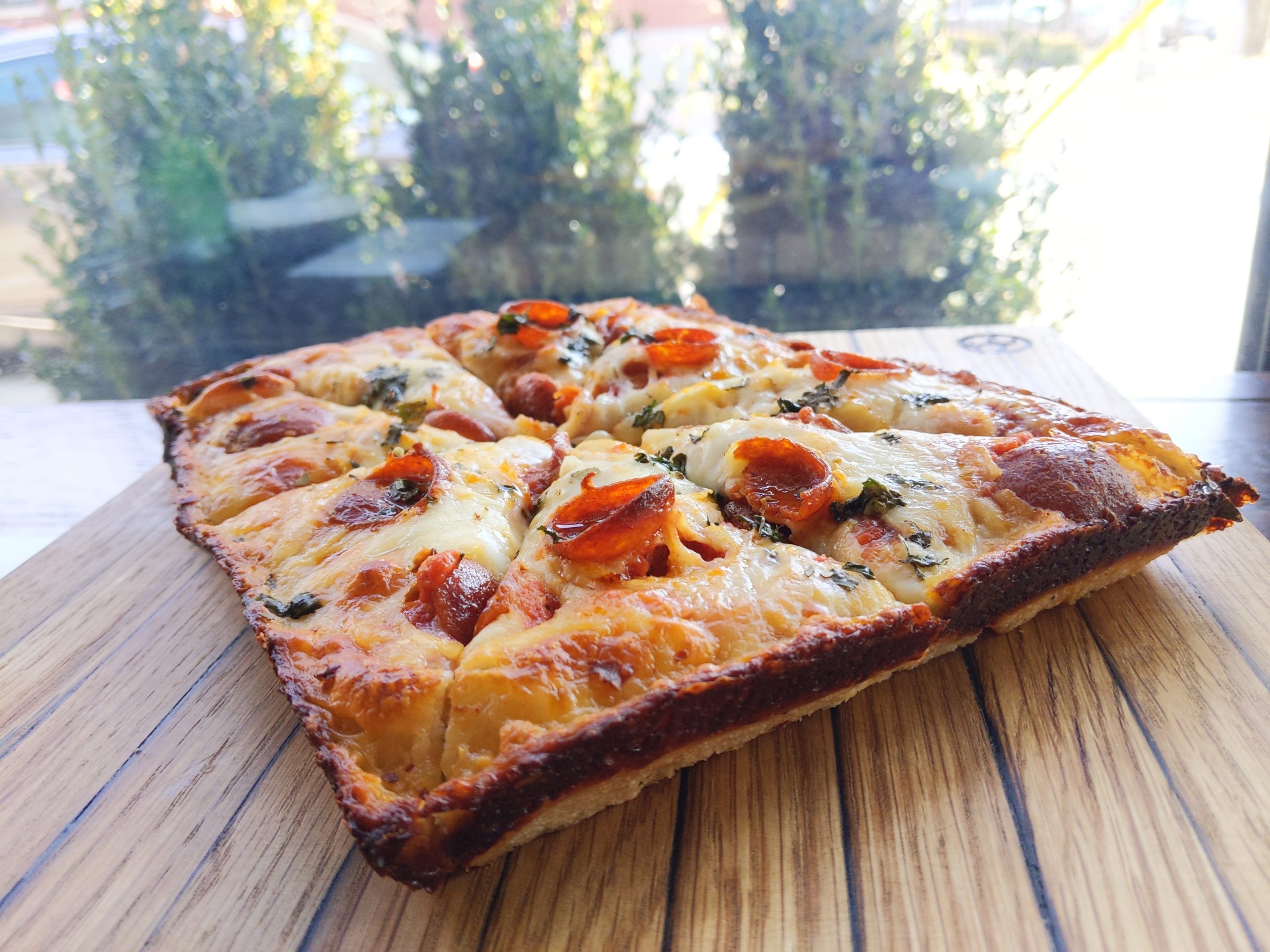 In Downtown Frankfort, check out Capital Cellars. This store combines a restaurant, bar, and liquor store, and does it effortlessly. Frequented by many locals and the occasional tourist, here you can get lunch or dinner and pair it with an Old Fashioned made with your favorite bourbon.

If undecided on what to eat, the Bourbon Bacon Jam Sandwich and the Bourbon Pimento Cheese are both delicious. Just remember, if you’re planning to drink, do not drive.

Two other restaurants in Frankfort that were recommended by locals, but we couldn’t try were The Stave and Gibby’s.

In Louisville, for breakfast or lunch, consider going to Butchertown Grocery Bakery, where we enjoyed a crispy, cheesy, and savory Detroit Style Pizza. There are also sandwiches, pastries, salads, and coffee. Another breakfast/lunch option is Biscuit Belly. The “Damn Good Biscuits” tagline is not an exaggeration, and both The Rockwell and Mama’s Boys passed with excellent marks.

Please note that if you go during a weekend (especially after 9:00 am), prepare yourself to wait in line for 10-15 minutes or more.

For dinner, if you like Mexican food, don’t hesitate to make a reservation at The Mayan Cafe. Some of the items on the menu that I can recommend are the Yucatec Sabultes, Cochinita Pibil, and the Mayan Burger.

Another restaurant we enjoyed during our visit was Butchertown Grocery. Yes, it is ‘related’ to the bakery. Here, the standouts were the Bourbon Barrel Smoked Pork Belly, Gnocchi, Hanger Steak, and Beignets.

In Frankfort, the Home2 Suites by Hilton Frankfort is on a strategic location between many distilleries, including the Woodford Reserve Distillery and Buffalo Trace Distillery. Parking and breakfast are complimentary, and the rooms are spacious. Aside from its proximity to distilleries, it is not far (about 12 minutes) from Downtown Frankfort. There are also numerous fast food joints near the hotel. Book it Here.

In Louisville, the Homewood Suites by Hilton Louisville Downtown is not only walking distance to a few attractions such as the Evan Williams Bourbon Experience, but it is also close to the Frazier History Museum and the Louisville Slugger Museum and Factory. Parking is not free, but in our experience, walking and using rideshare services was the way to go. Your hotel stay includes breakfast, and if you stay during weekdays, it also includes an evening reception. Book it Here.

Don’t forget to Share and Pin ‘A Taste of the Kentucky Bourbon Trail’. 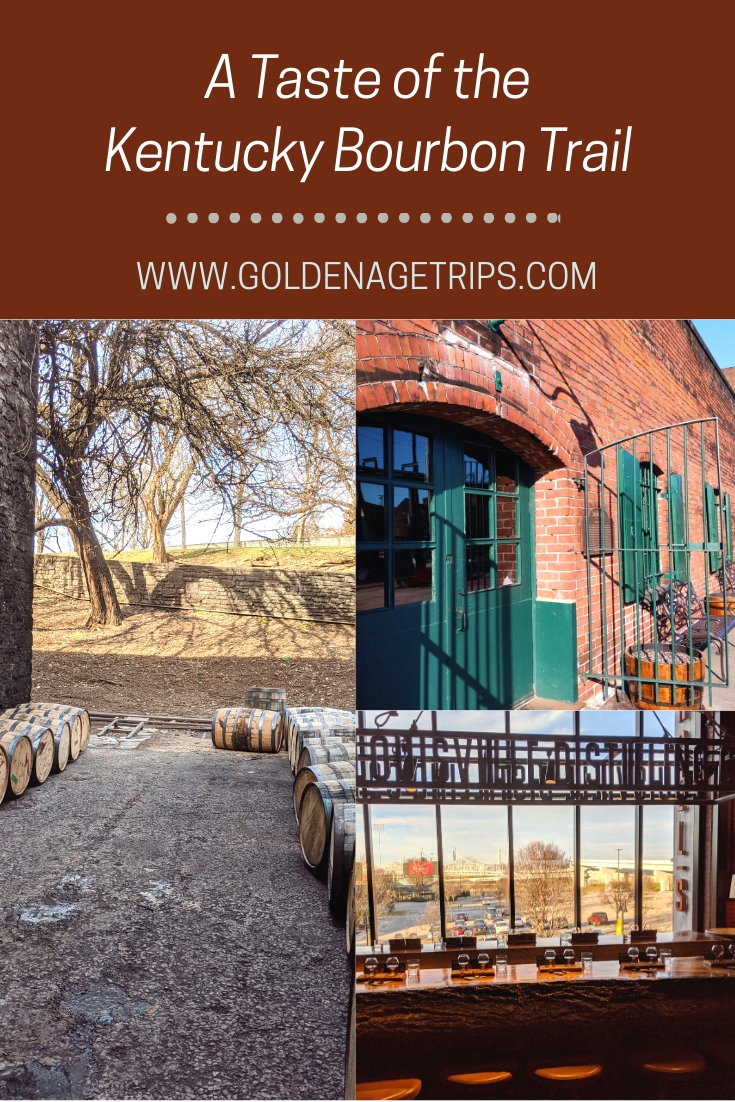