HomeBlogDestinationsZurich and Lucerne in a Weekend

Zurich and Lucerne in a Weekend

Switzerland. Cheese, chocolate, and the Swiss Alps. After a 9-hour flight from Miami, I was more than ready to arrive and start enjoying a weekend in Zurich and Lucerne.

Nevertheless, I need to give props to Swiss Air. A flight that only cost me around $500.00 USD had great food (I can’t believe I’m saying this about airplane food), an extensive selection of entertainment, and attentive staff. Excellent value for your money I must say.

It was just before noon when we arrived at the Zurich Airport. After the ‘always fun’ border control and customs protocols we boarded the tram and picked up our Pocket WiFi (we used Travelers Wifi) and rental car.
Then, we went straight to the AirBnB we had booked for the next two nights. The Bungalow was in Meilen, a municipality in the canton of Zurich. According to the GPS, we were not that far, but when you are driving through steep and narrow roads, 40 minutes might seem an eternity. 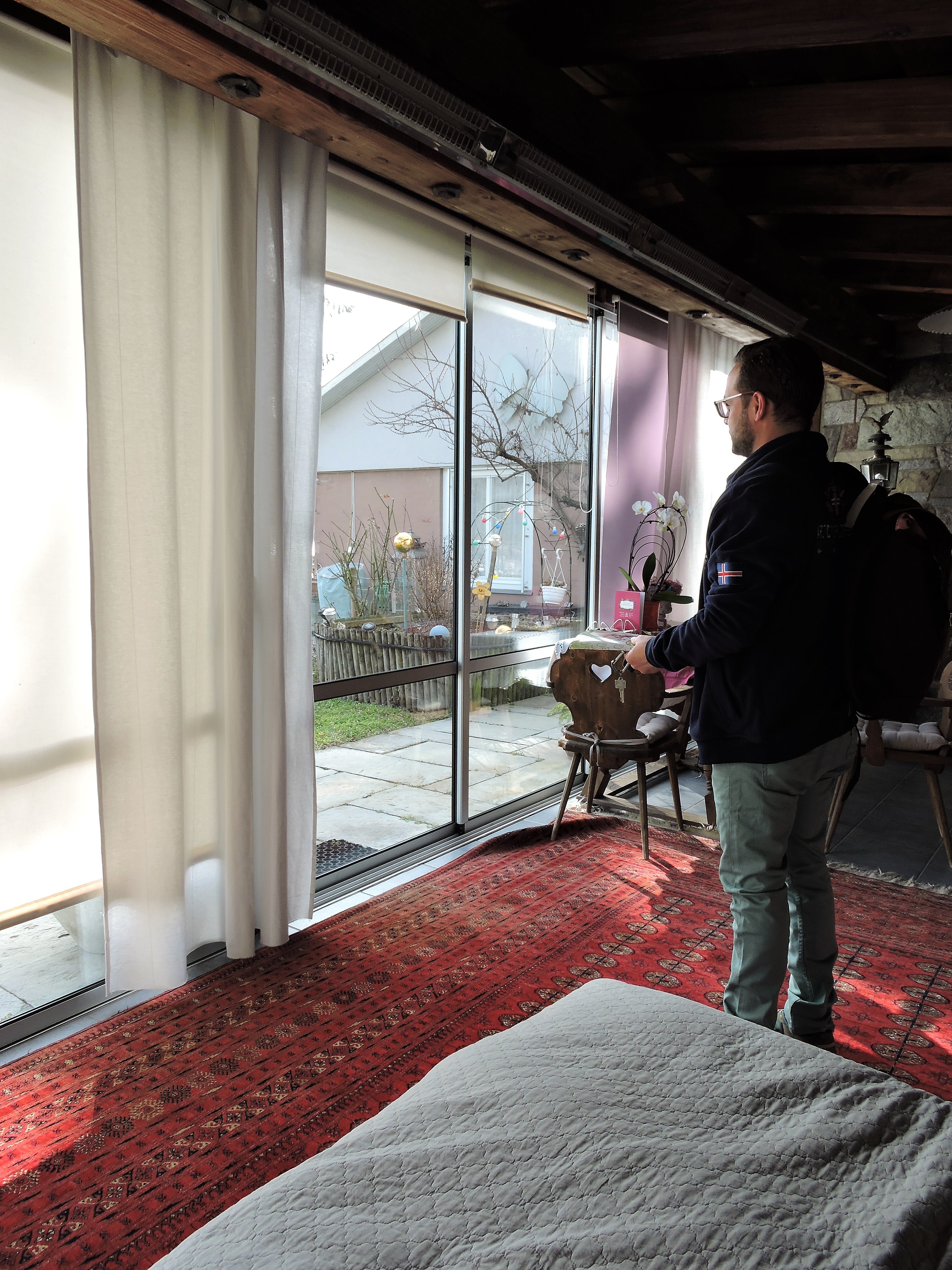 Cozy Bungalow in Meilen, Switzerland.
Do you want to enjoy your own Private Bungalow overlooking the Alps, at a fraction of the cost of a hotel room? Click Here to get $40 Off your first AirBnB booking.
Being completely honest, we were tired and ready to sleep. Also, the coziness of the Bungalow was not helping in keeping me awake. However, we had plans for the afternoon and “I didn’t cross an ocean just to sleep” (at least that’s what I was telling myself). So, we took a shower and were ready to go.
To Avoid Being a Victim of Jet Lag, Check out 9 Tips from Travel Bloggers on How to Avoid It

I needed something to keep me awake, which made Café Schober our first stop. This century-old cafe was packed, but we were taken to a table fairly quick. We ended up ordering two Mocha Coffees that were delicious, and two croissants that never arrived.
Sadly, we were in a rush and couldn’t keep waiting, since we had tickets for the FIFA World Football Museum and we had less than 2 hours until closing time. 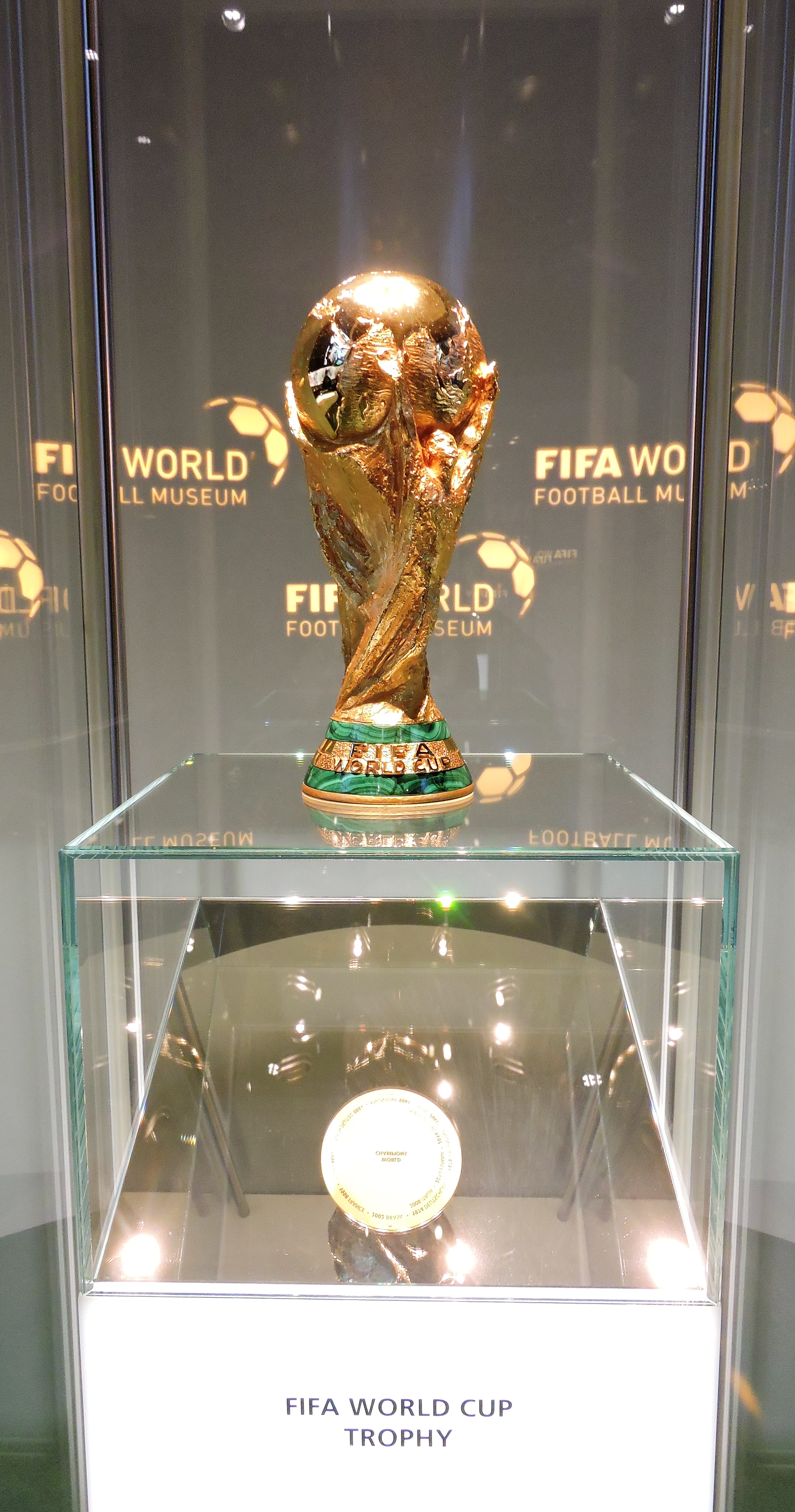 FIFA World Cup Trophy
We had bought our tickets for the FIFA World Football Museum online. This type of purchase made admission a breeze. There were not too many people, and we only had to scan our tickets on the turnstiles to get in.
The museum’s almost new. It opened in 2016, and it’s noticeable. All the exhibitions were in perfect condition, and everything looked brand new. It’s a great place for everyone that loves Football, including kids.

Now, it was time to go to the Altstadt or Old Town. The Fraumünster and the Grossmünster churches were now in front of me. I had seen many pictures before arriving, and they met my expectations.
Talking about expectations, I was not expecting to hear reggaeton music in Old Town Zurich. The recount of this incident might seem like an odd side commentary, but as a Puerto Rican, I assure you it’s not. Who would have thought that Daddy Yankee and Nicky Jam were going to be blasting out of speakers in Old Town Zurich? Not me, that’s for sure. 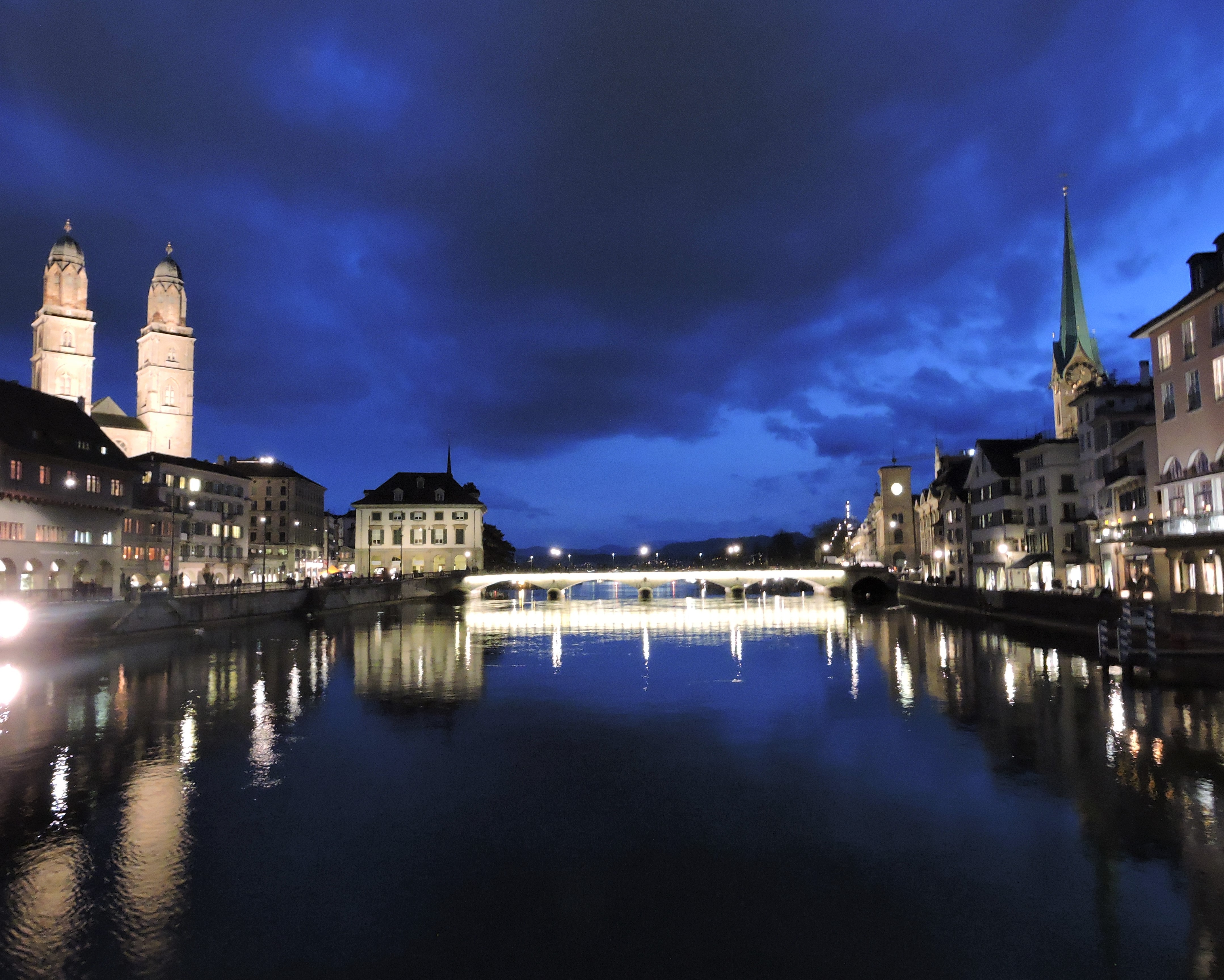 Zurich Altstadt (Old Town) at Night
We kept walking while looking at the gorgeous windows displays, but it was starting to get windy and cold (er). This weather was our cue to have dinner. We did not have to think much since we had seen the restaurant Raclette Stube in a TV Show and there were no doubts we were going there. 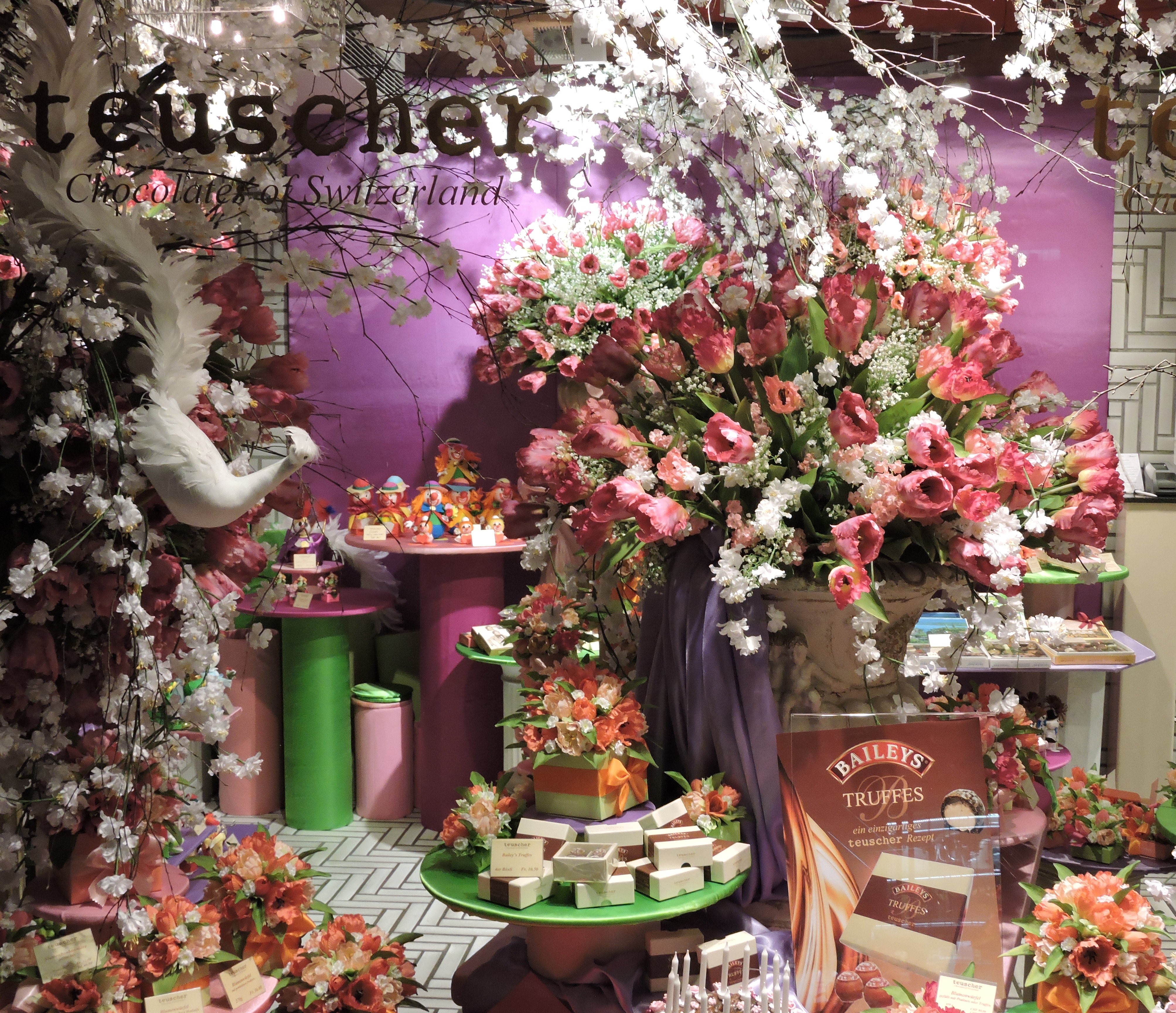 Just your typical Zurich store window display.
For whatever reason, it did not occur to us to make a reservation. Luckily, the server told us that if we were able to eat in an hour or less, he could give us a table that was reserved for an hour later. Challenge accepted.
Around 20 other people that came after us were not that lucky, so please remember to reserve a spot if interested. We didn’t hesitate (ok, maybe we did, once we sniffed the crazy overpowering smell of cheese) and said yes. I’m glad we did. Yes, the menu it’s limited. Don’t be looking for something else that’s not melted cheese.
Nonetheless, it was the perfect ending to our 36-hour day. Cheese, bread, potatoes, and wine. If that is your definition of a good life, then this place would be perfect for you.

The next morning, we started by having breakfast at Kafi Dihei in Zurich. It is a small breakfast place with indoor and outdoor seating, where food is good, and prices are reasonable (for Switzerland). 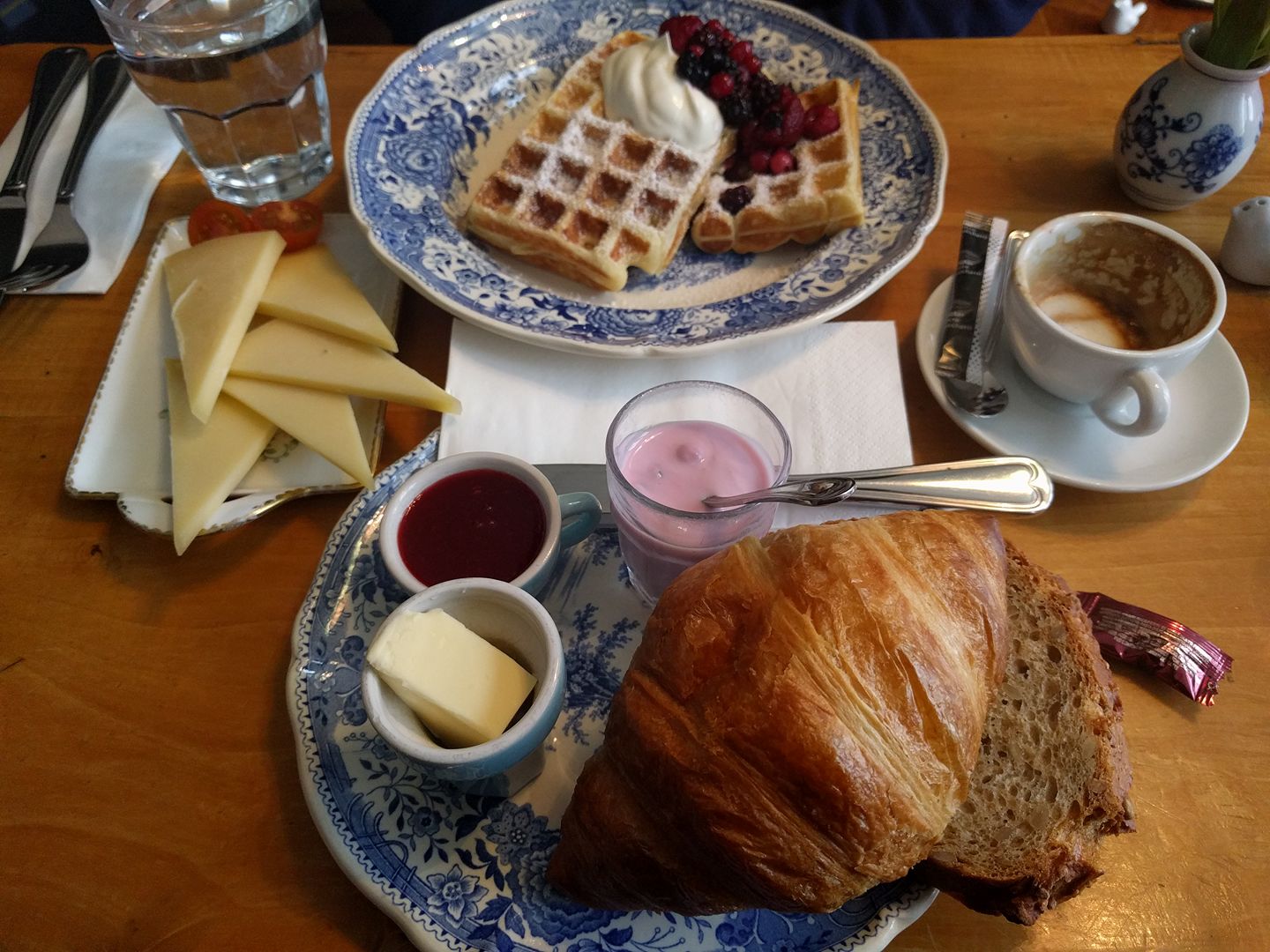 Waffles with Crème fraîche & Bread and Croissant with Butter, Preserves, and Yogurt.
Now that we were well fed, we departed to Lucerne. Maybe because it was a Sunday morning, there was almost no traffic, and it took us less than an hour to arrive.

How to get from Zurich to Lucerne (Luzern)?

We had rented a car, so we drove through the A4 and A14. You can also take a train from Zurich Main Station to Luzern. As always, I recommend using Rome2rio for all your mass and public transportation needs. If you want more information about the Swiss Railway Click Here. 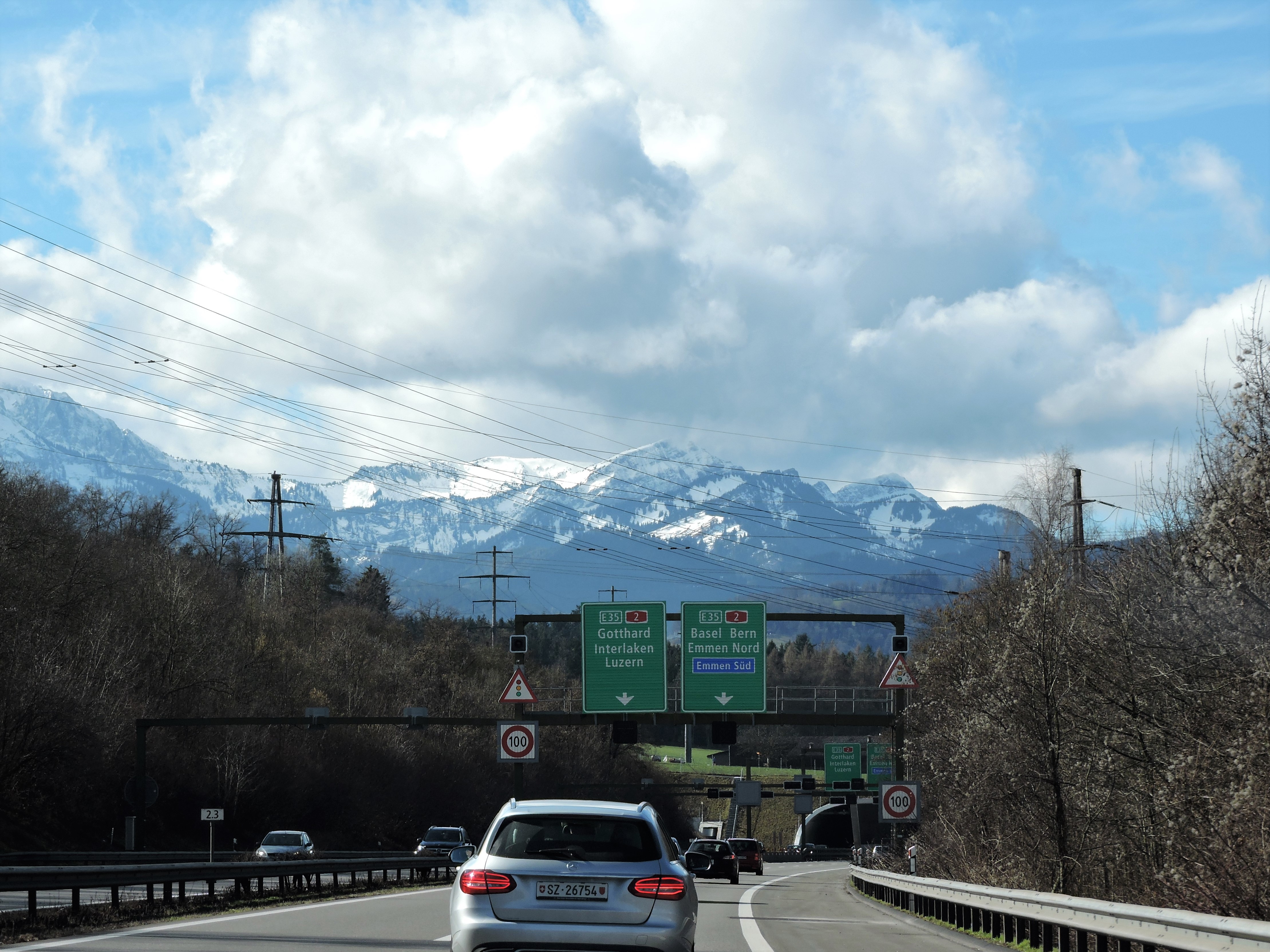 The road from Zurich to Lucerne.
Lucerne’s a place not to be skipped if you are visiting Switzerland. It has that perfect and almost “photoshopped” beauty that Bourdain hated. I came here after Anthony Bourdain passed away on June 8, 2018. I just want to thank him for inspiring me to travel and try things I didn’t felt comfortable with at first but ended up being great experiences. Once you arrive, the first thing you will notice it’s the Kapellbrücke. This 14th Century wooden footbridge it’s the oldest wooden covered bridge in Europe and its very eye catching and photogenic. 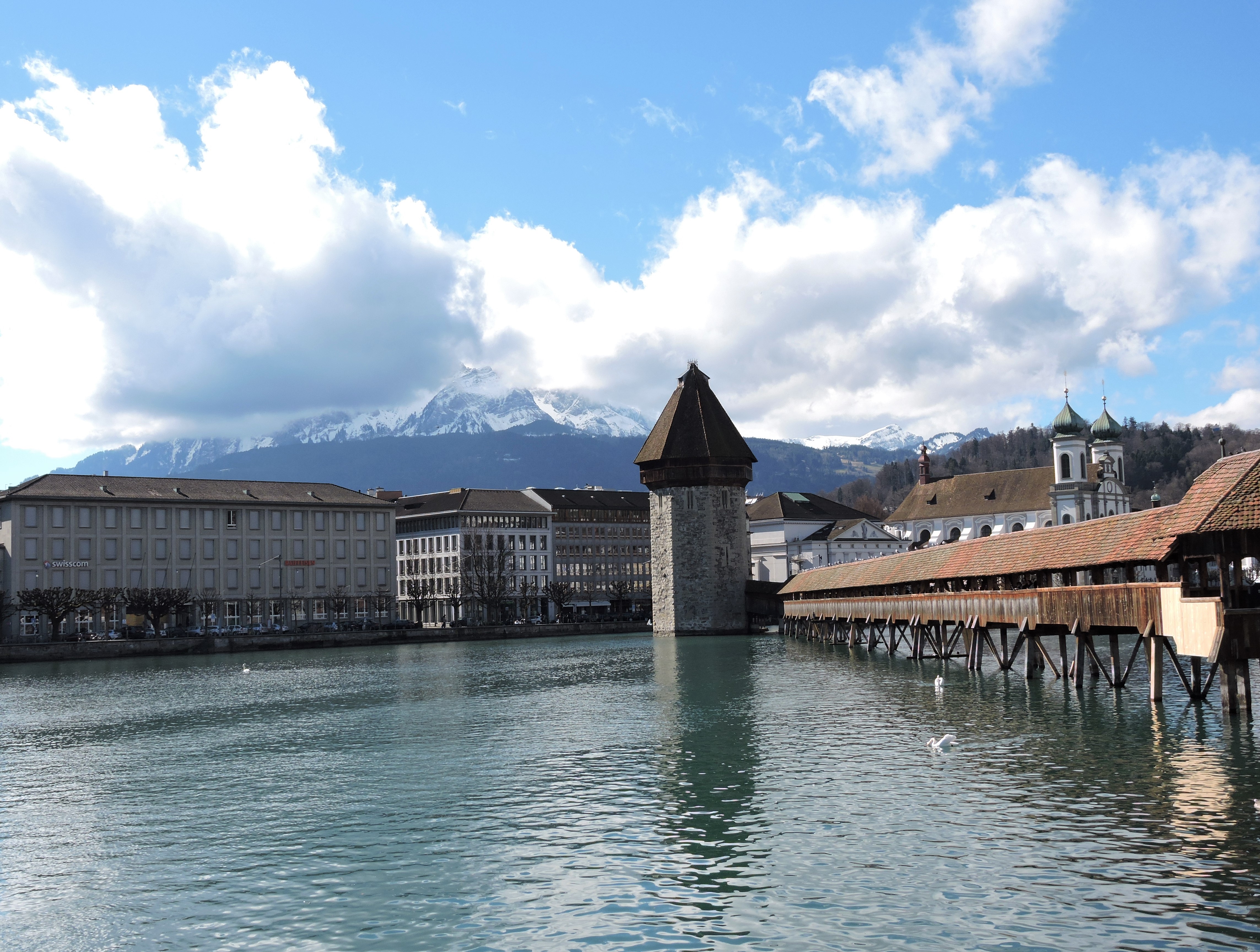 The Kapellbrücke in Lucerne.
Even if we did not visit Mount Pilatus or Mt. Rigi (the most popular attractions in Lucerne together with the Kapellbrücke), we enjoyed the time spent in this beautiful city. It’s the perfect place for a stroll, and to grab a bite or drink while enjoying the gorgeous views. 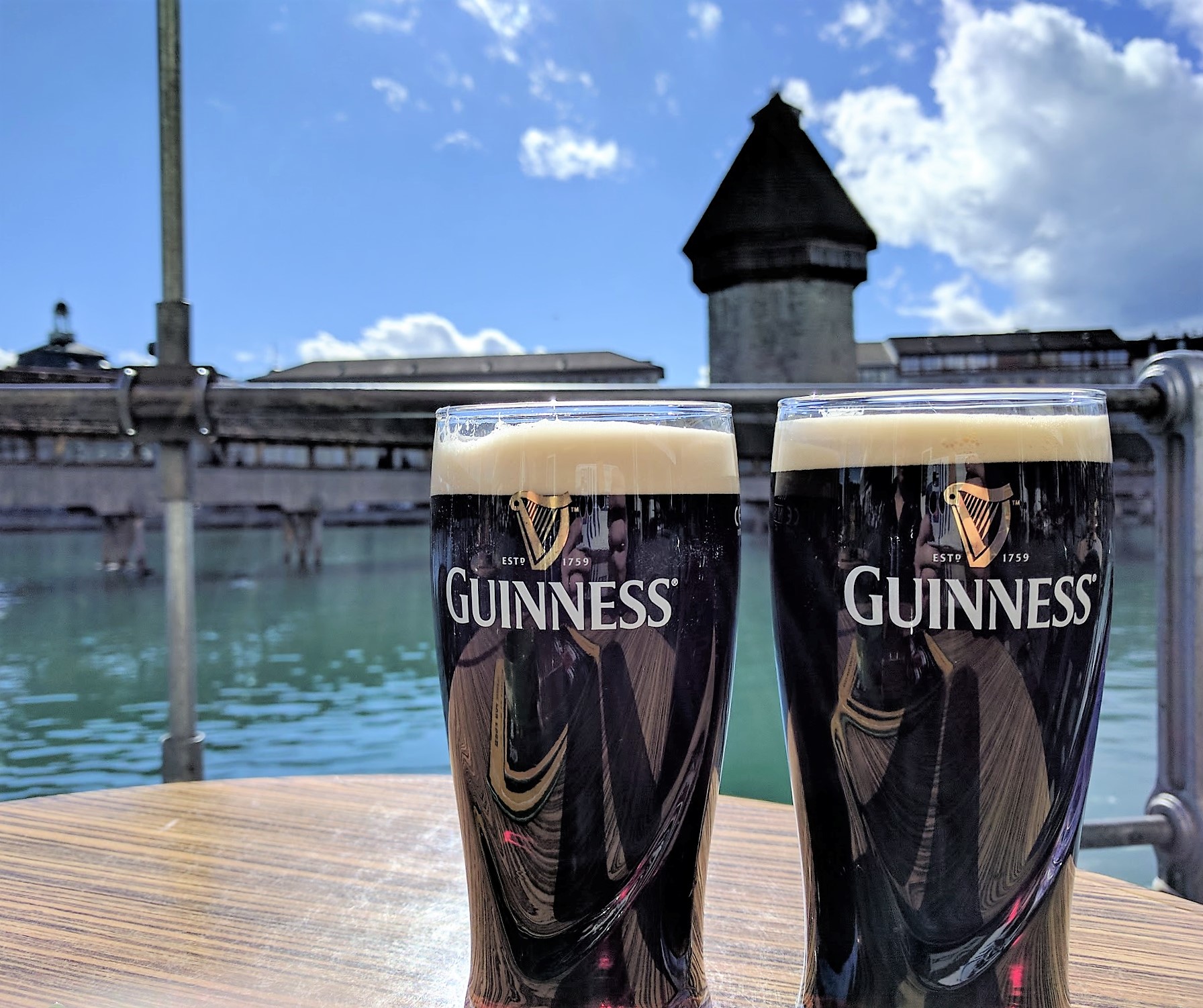 Guinness by the Kapellbrücke. 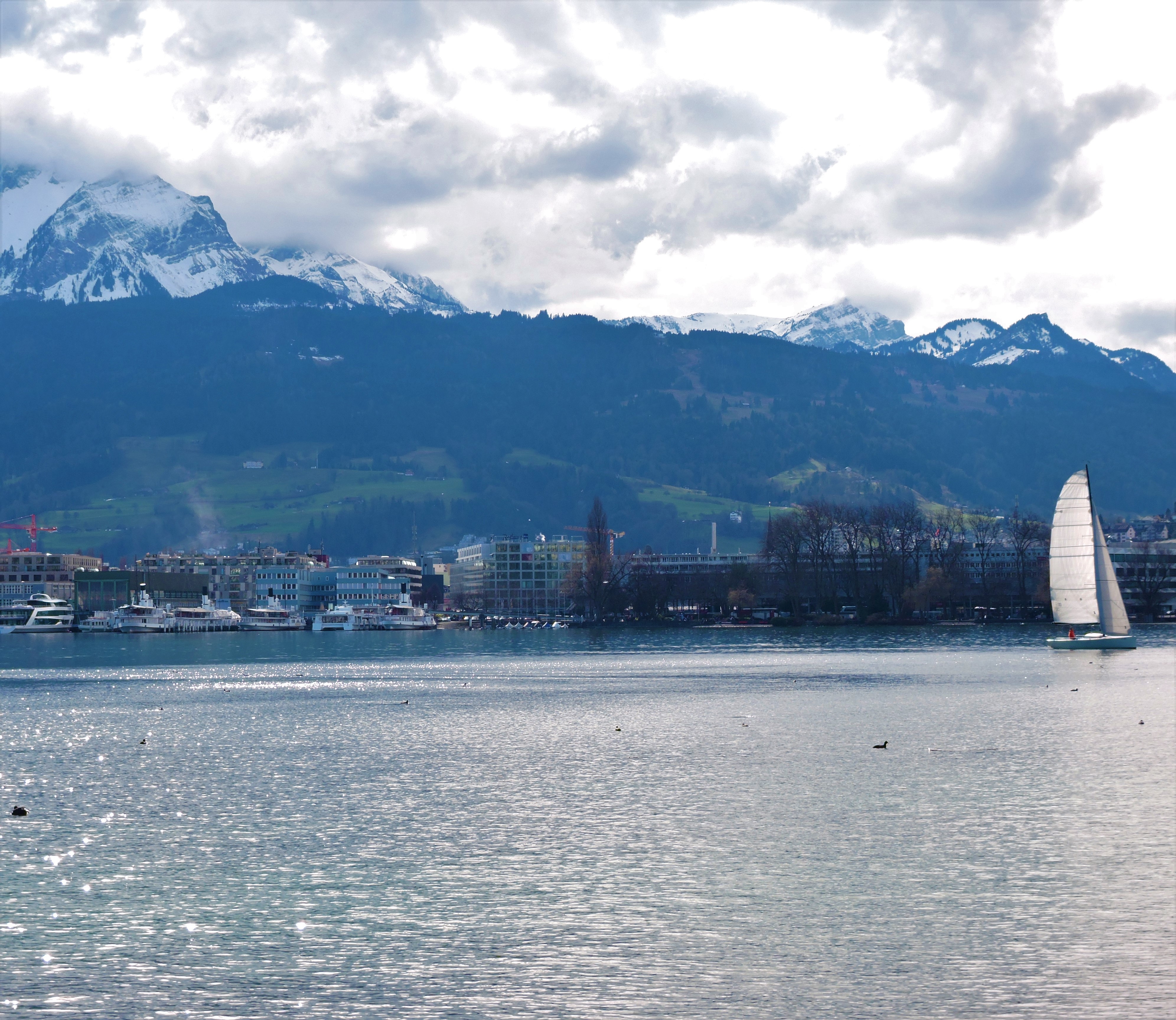 Views while strolling along Lake Luzern.
As part of our visit, we also had plans to visit the Lion Monument. This monument was carved out of a sandstone rock above a pond, and it’s a memorial to Swiss soldiers that died during the French Revolution. It is truly a work of art, and a beautiful place to slow down, take a seat and reflect. 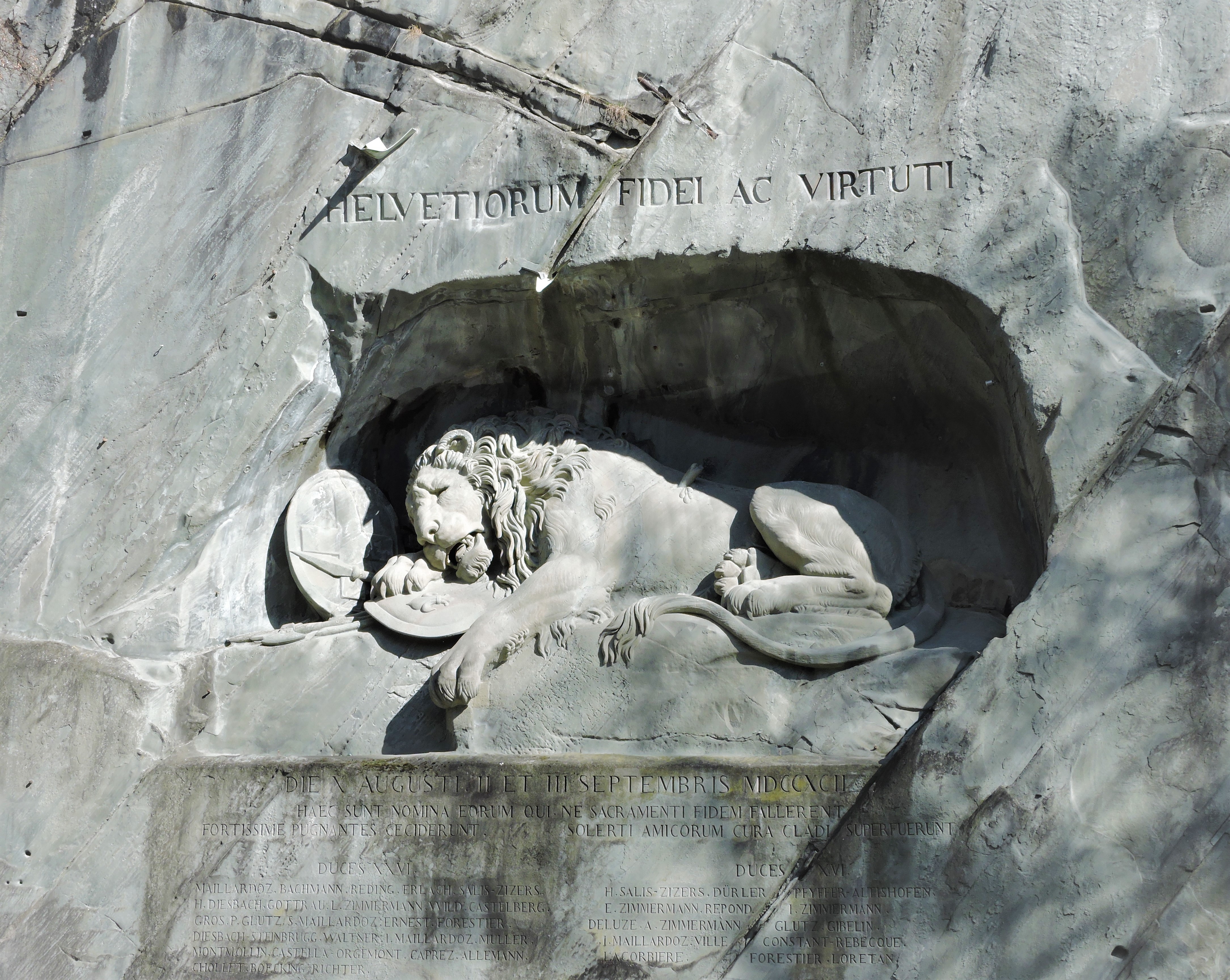 Lion Monument in Lucerne
It was now time to return to Zurich, but before leaving, we stopped to buy a few souvenirs. Nothing was out of the ordinary, just your typical touristy souvenir shop when the unexpected happened.
My credit card was charged $1700.00 USD instead of $17.00 USD. I saw the panicked expression on the employee’s face until he confessed. After a long 10 to 15 minutes, a call to Mastercard, and many apologies, everything worked out. The transaction was canceled, and I was able to leave Lucerne happy and full of great memories.

Don’t forget to Share & Pin how to get from  Zurich to Lucerne and what to do in Zurich & Lucerne in a Weekend! 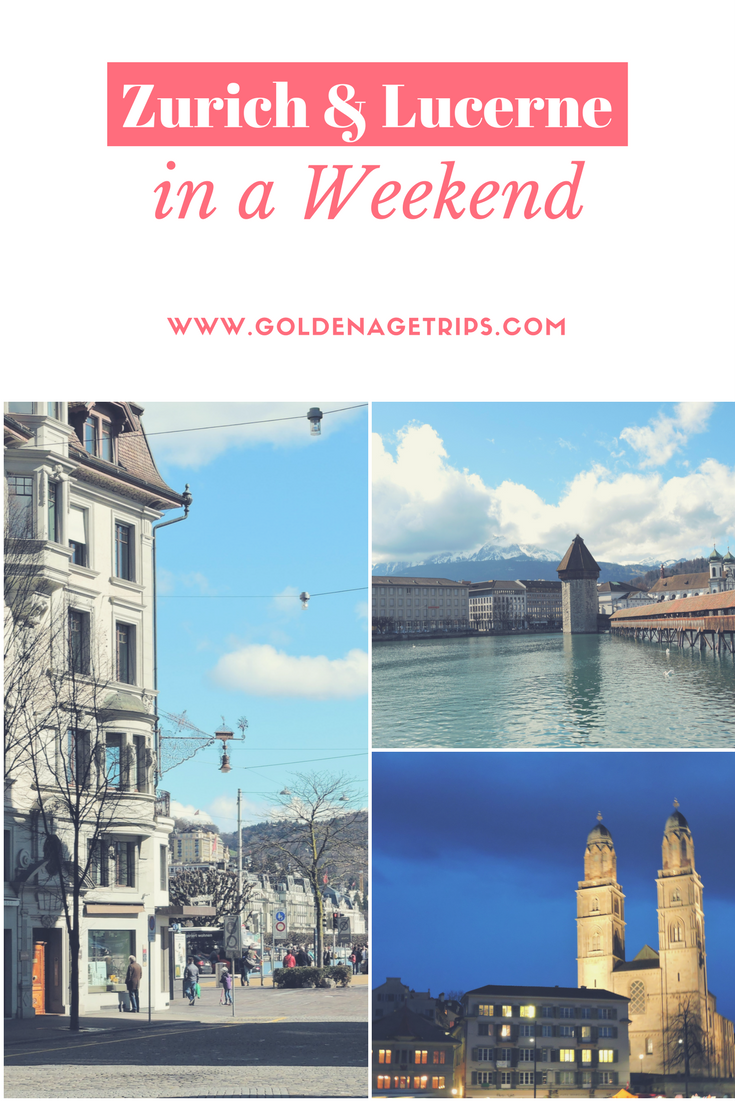