It is no secret how popular Charleston, SC is these days (just like the ol’ days). The combination of southern charm, antebellum architecture, and innovative and tasty food are only a few of the many things that keep attracting more and more visitors to this Southern city. To avoid the crowds, we’ll give you suggestions on how to enjoy weekdays in Charleston South Carolina without having to deal with bachelorette and bachelor weekends. 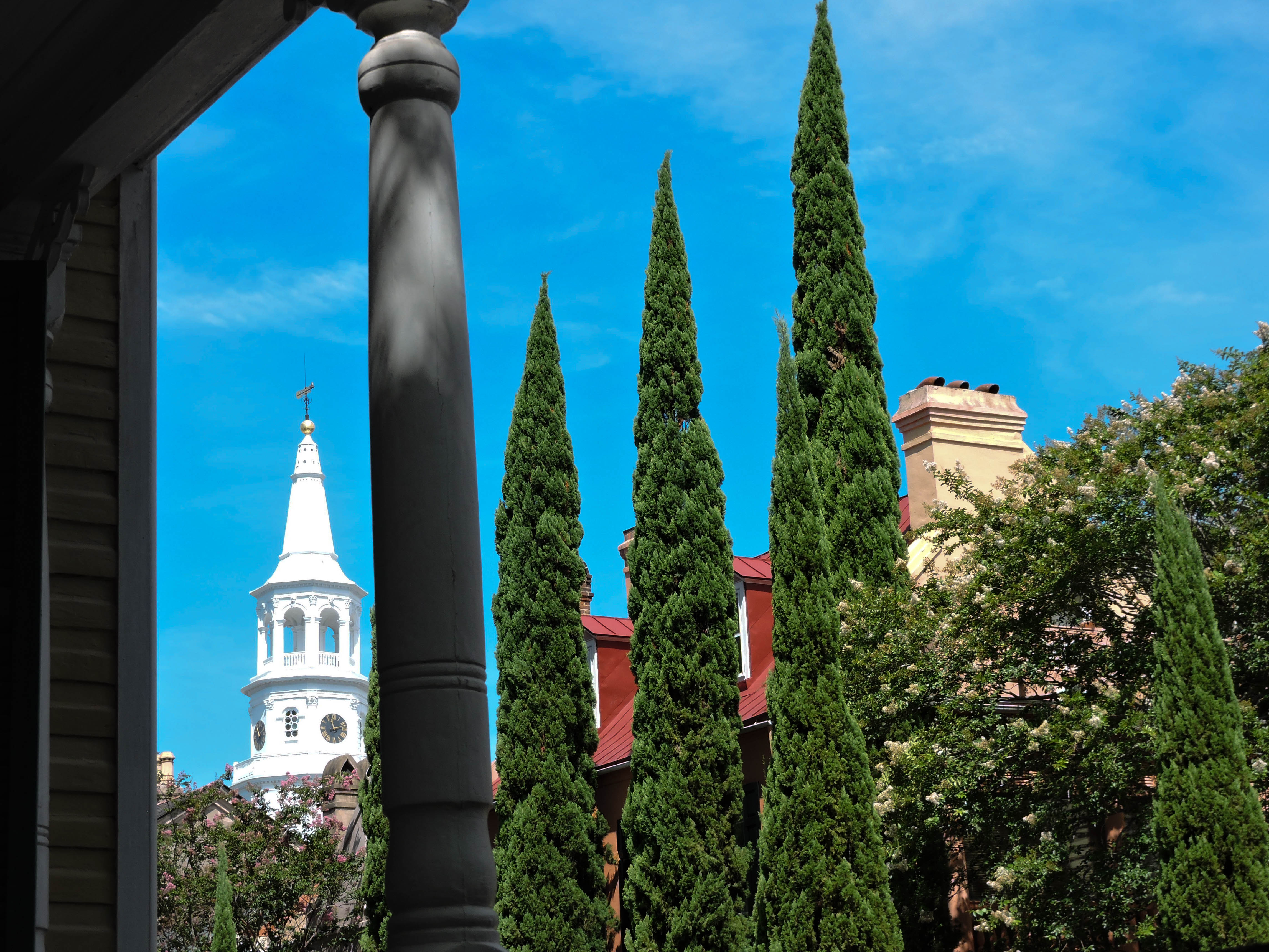 Where to stay in Charleston, South Carolina?

The general answer to this question is Downtown. Charleston is a walkable city, and one if not the best way to appreciate it is by walking through its streets and picturesque alleys (or lanes as the locals call them). 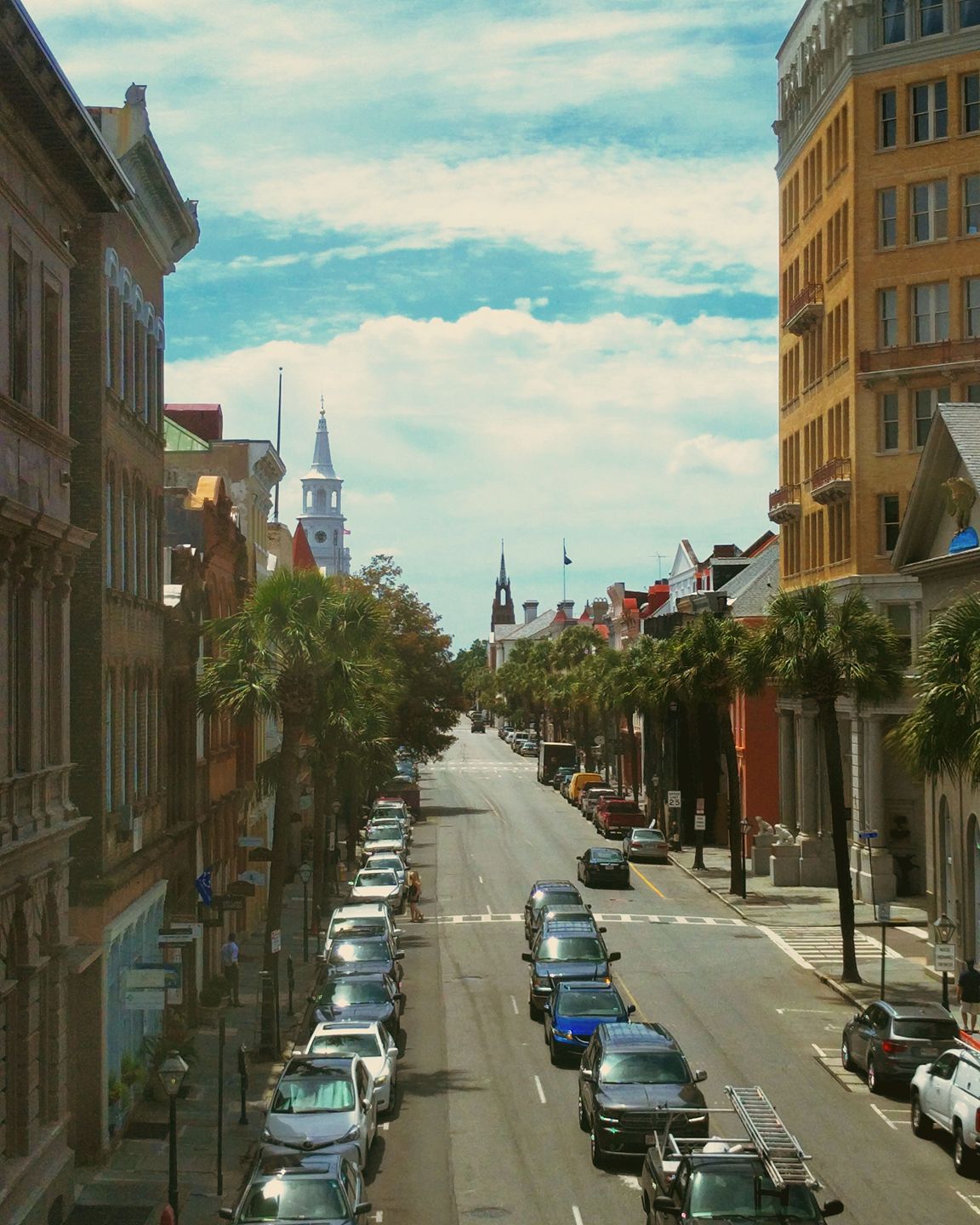 The biased answer is King’s Street, where many shops, art galleries, and hotels line up the streets. This street is where we stayed during our visit, specifically at the Fulton Lane Inn (Book It Here!). The place is clean, romantic, and it breathes tranquility. The Bed & Breakfast includes a daily afternoon reception at its sister property, the Kings Courtyard Inn (Book it Here!). Also, during the evening, complimentary sherry is available to be enjoyed in the lobby or the room. One of the best things about the Fulton Lane Inn is that they bring a continental breakfast (and is included) to your room every morning. Besides, parking is always available for guests for a daily fee. 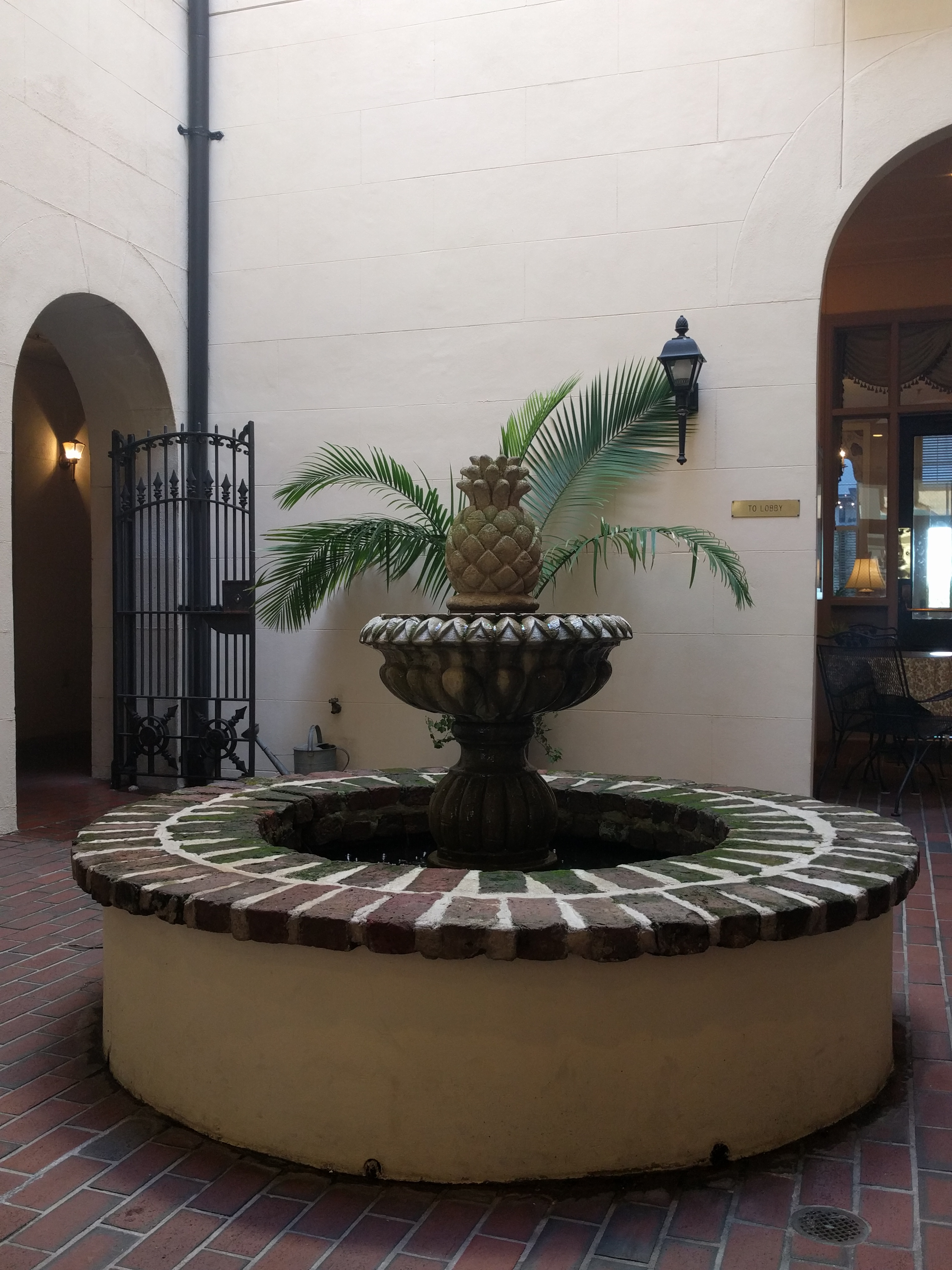 What to do and see in Charleston, South Carolina? 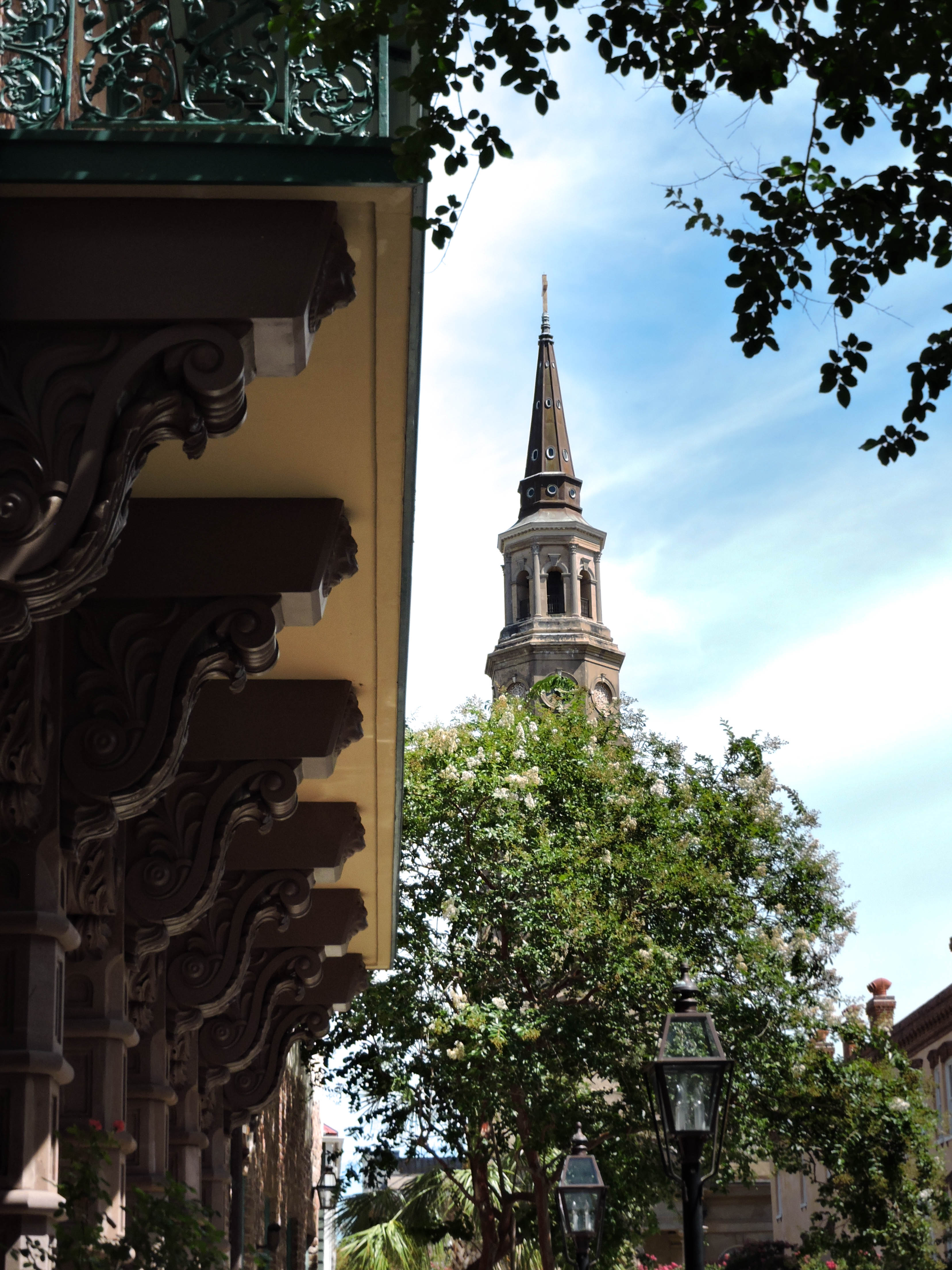 St. Philip’s Church & the Dock Street Theatre (left) – One of the many shots Joyce from Charleston History Tours will teach you to compose.

For our first morning in Charleston, we had booked a tour with Joyce at the Charleston History Tours. Joyce arrived on-time and ready to start the tour. After a brief introduction, it was time to go. There is so much to see and discover in Charleston! Joyce is extremely knowledgeable in Charleston’s history, and you will not miss any point of interest during her tour. She also gave us tips on what other places to see after the tour, which we listened to, and couldn’t have been more helpful.

Now that you are already in the South check out 10 Pictures That Will Inspire You to Visit Savannah During The Summer. Just 2 hours from Charleston.

Through Joyce, we learned this street was used to shoot a scene in Mel Gibson’s The Patriot (2000). What we didn’t know was that the whole movie was filmed in South Carolina, and if interested, here is a list of other locations used during the filming. 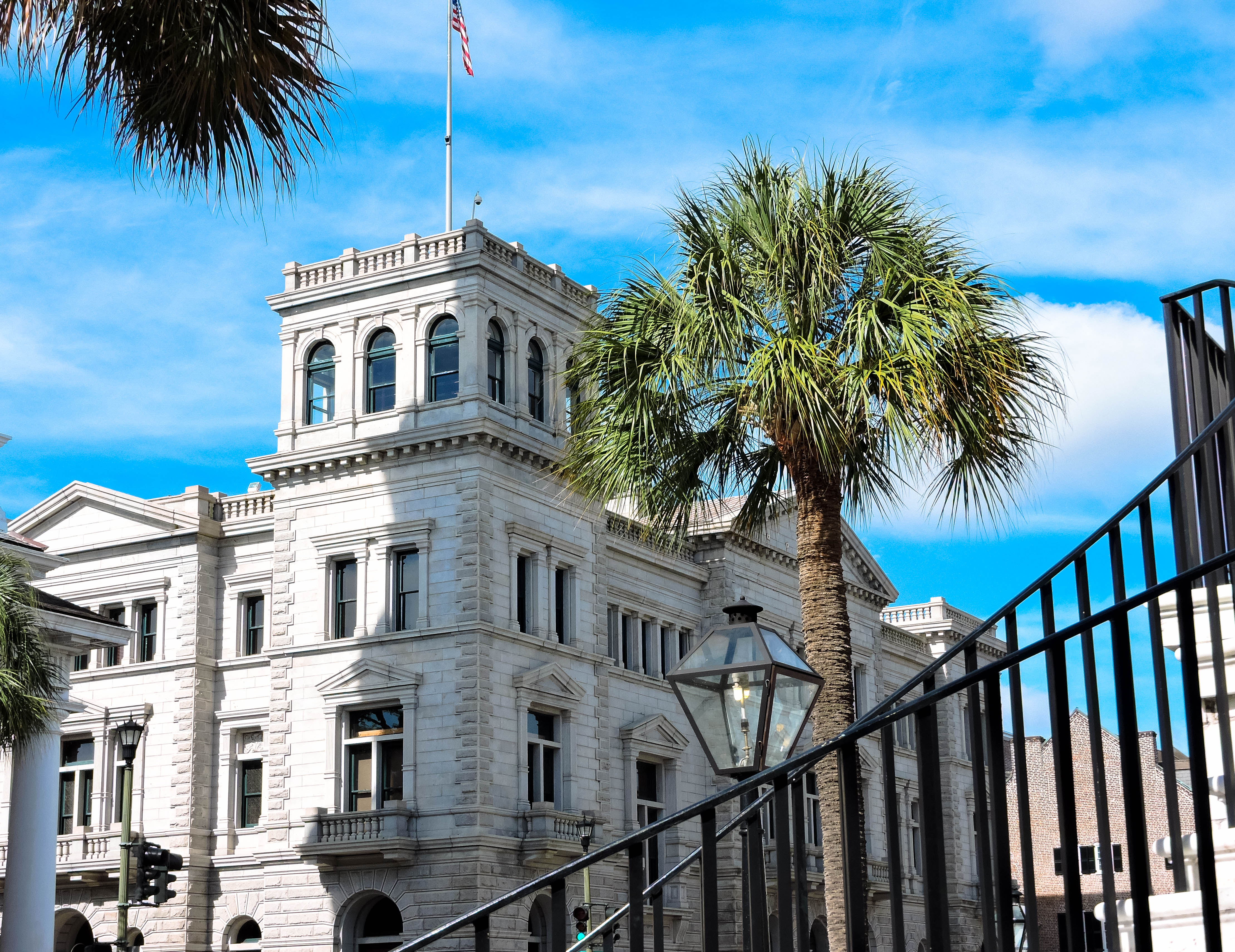 The Four Corners of Law might not sound like the most exciting thing to see. However, I assure you it’s nice. The term was coined by Robert Ripley (the creator of Ripley’s Believe it or Not), and it refers to the presence of a federal, state, local, and ecclesiastical institution on each corner of the intersection. 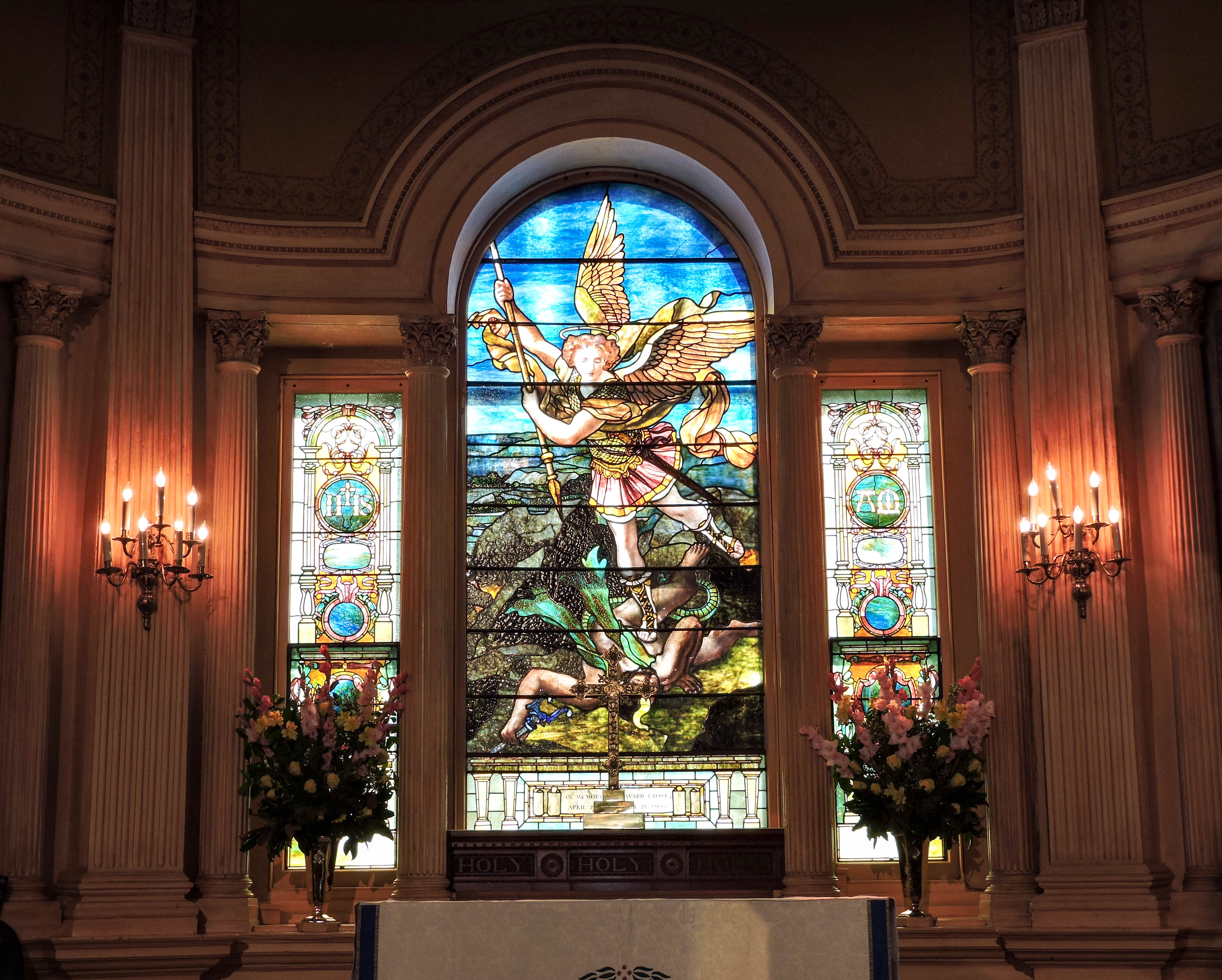 The inside of the St. Michael’s Episcopal Church – The ecclesiastical institution at the Four Corners of Law

Cathedral of St. John the Baptist 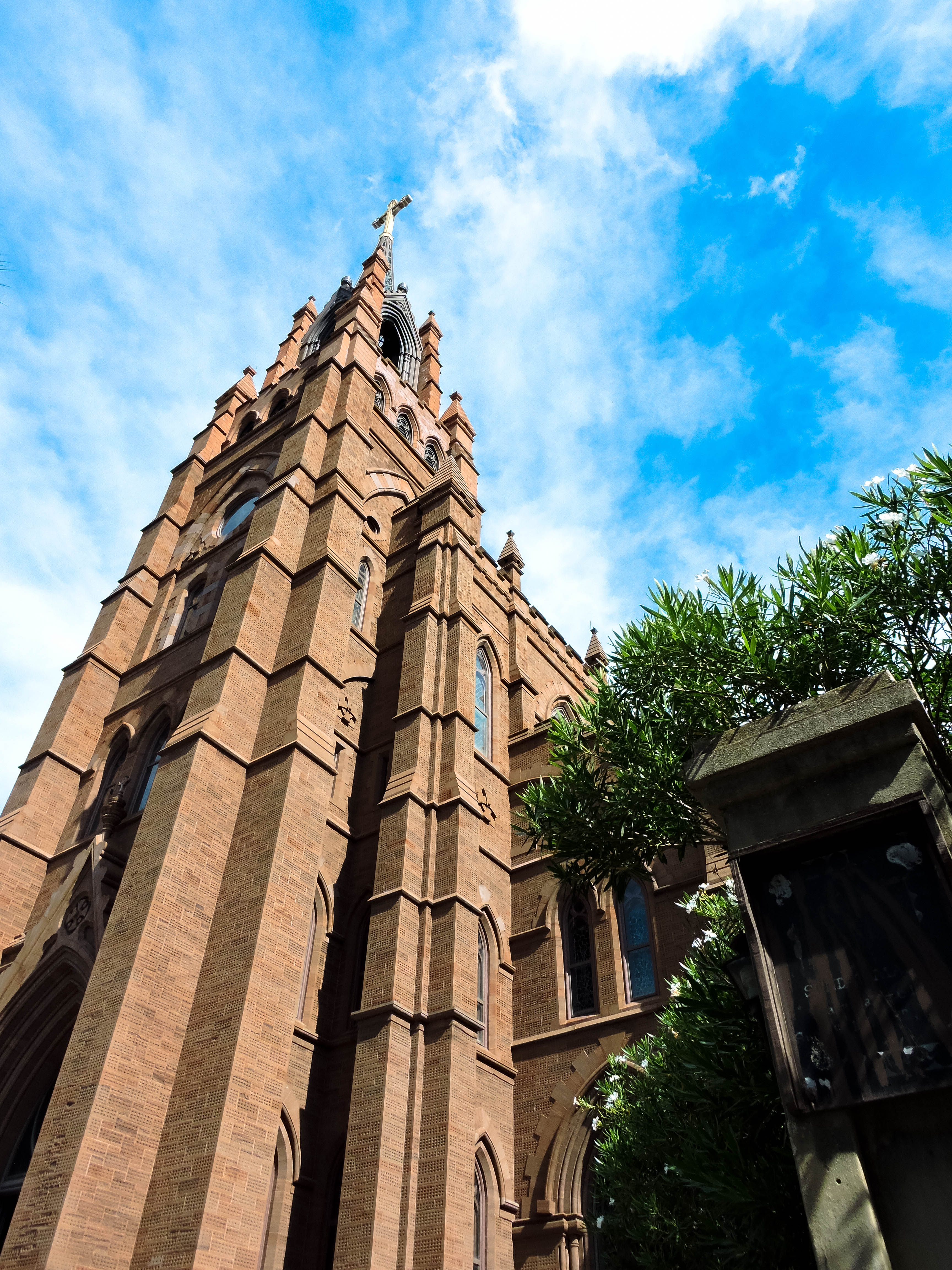 Cathedral of St. John the Baptist

Of neo-gothic architecture, the Cathedral of St. John the Baptist in Charleston burned in a great fire in 1861. It was rebuilt on the foundations of the previous structure, and designed by the same architect of the original. In its facade, you can see some markings, and it is said that every marking represents one labor hour spent on its reconstruction.

One of Charleston’s Bastions 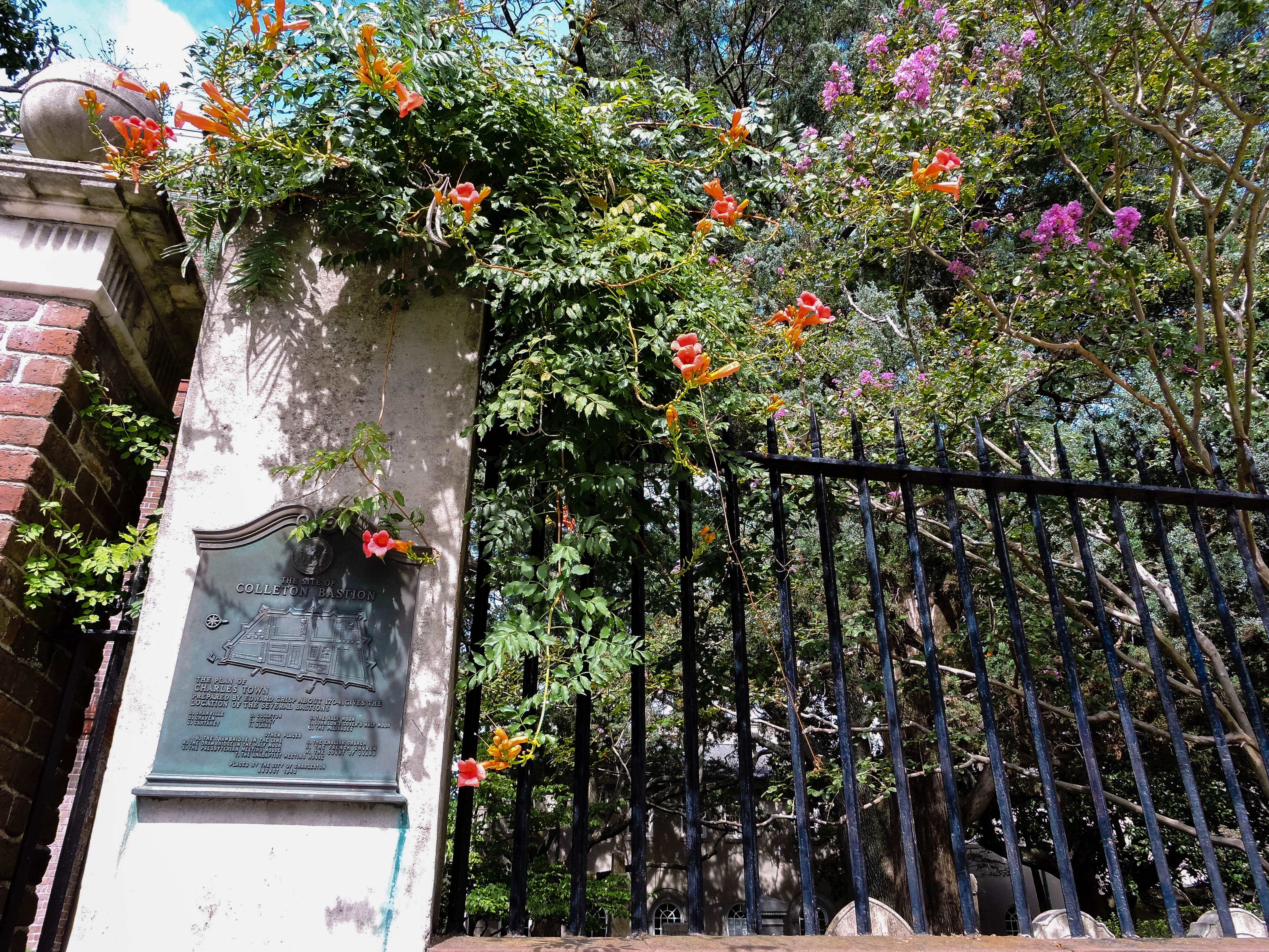 The site of Colleton’s Bastion

Old Charleston or Charles Town, used to be a walled city. There are markers through the city that point where the walls used to be. The Colleton’s Bastion was likely the first of the fortifications to be dismantled for the westward expansion of the town beginning in the 1720s.

Other points of interest:

The Battery – a landmark defensive seawall and promenade. Now it’s the perfect place for an afternoon walk or a run if you are into that.

The Old Exchange & Provost Dungeon – this building now turned museum has served different purposes through the years. A military prison, public market, public meeting place, and the place where George Washington stayed during his one-week visit to Charleston after the civil war.

The Old Slave Mart Museum – Charleston’s history is not all southern charm and beautiful buildings. At one time, Charleston was the nation’s capital of the slave trade. Some of the spikes you see above fences are not just for decoration but were put there because the house owners were scared of slave rebellions. Something to keep in mind when visiting Charleston is to consider that many of the now “cute single houses,” used to be where house slaves lived. The Old Slave Mart is the first African-American museum, and it used to be a place where enslaved people were held and sold after slaves auctions on the outdoors were banned.

Where to eat and drink in Charleston, South Carolina?

Disclaimer: I’m not a fan of seafood. As a result, this is a section you might want to skip if that’s what you’re looking for. 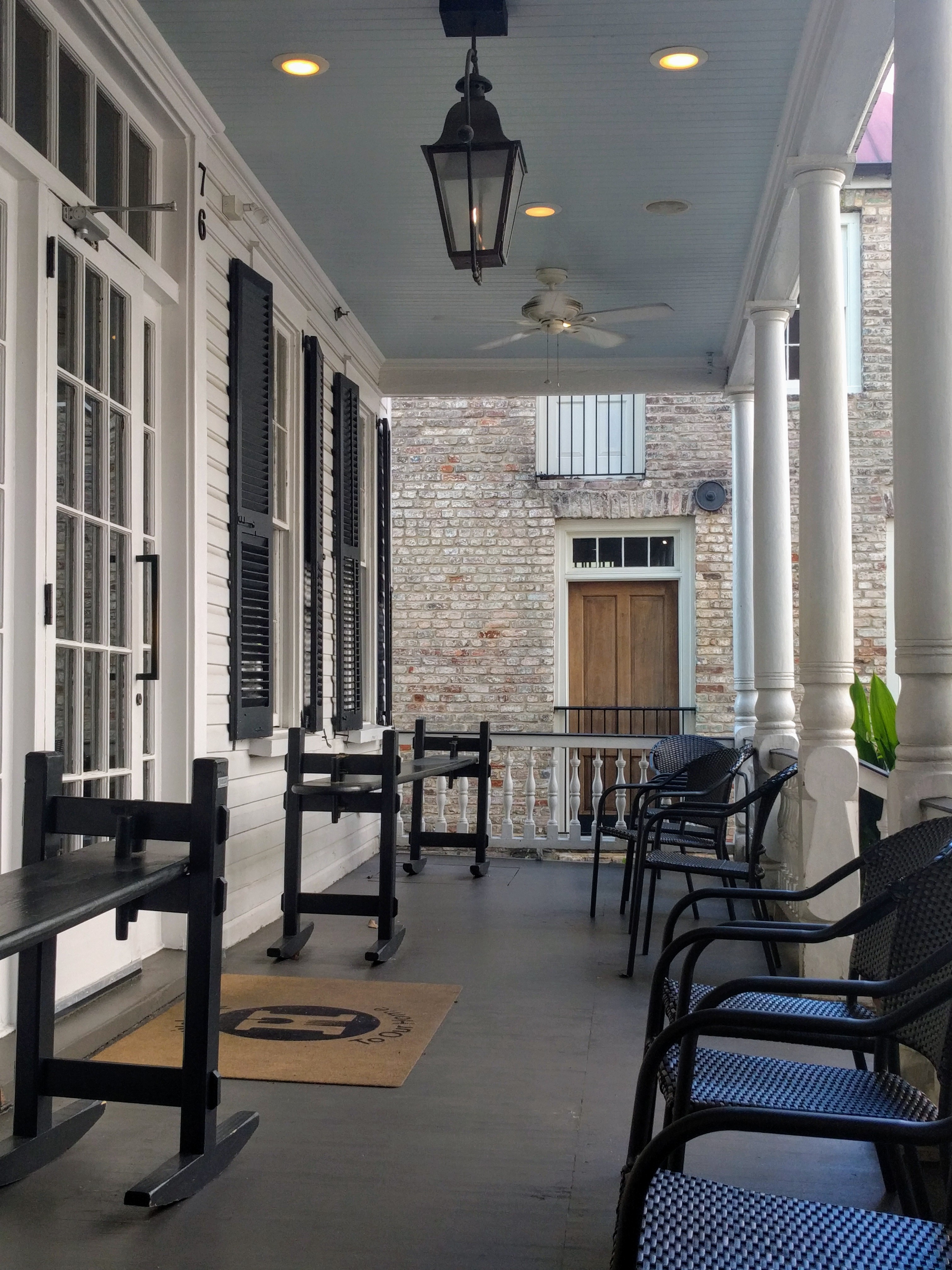 We could not skip a visit to Husk while in Charleston. It has been on almost every list for the past years of best southern restaurants. My husband would tell you it’s overrated, but it is a place with excellent service and an Old Charleston menu. Its chef, Sean Brock, has looked into numerous old recipe books to build his menu, and also everything is local. It’s a place you go for the ham and the seafood, not for the chicken. I have also read they have delicious burgers at the bar, which I’m hoping we get to try someday—recommended for a romantic/fancy dinner. Luckily, by going on a weekday, we were lucky to get a table in twenty minutes, even if there were no reservations available.

Closed for Business – The bar/restaurant seriously closed for business in October 2018.

Closed for Business is a no-frills bar/restaurant that makes one of the best pork rinds I ever had in my life. The soups and sandwiches are also delicious, and I did like the ambiance. I try to go as many places as I can when I’m on vacation, but I’ll admit we went here twice. They have a vast and ever-changing selection of beers, and no kids are allowed during the night. Doesn’t it sound great?

Sit down place for lunch—a historic pub with a courtyard, which also happens to serve delicious food. The Angus Steak Frites was one of the best meals I had in Charleston, but I’m biased towards chimichurri, parmesan truffle fries, and hangar steak cooked to perfection.

We stumbled on The Griffon during our first night in Charleston. We had already eaten so I cannot comment on the food (aside from that it was reasonably priced), but what’s a better place for a pint of Guinness than a British Pub? During the weekdays, it doesn’t appear to be that busy, and even if it’s called a “dive bar” by Bon Appetit, it doesn’t look like it unless dive bars are now spotless. 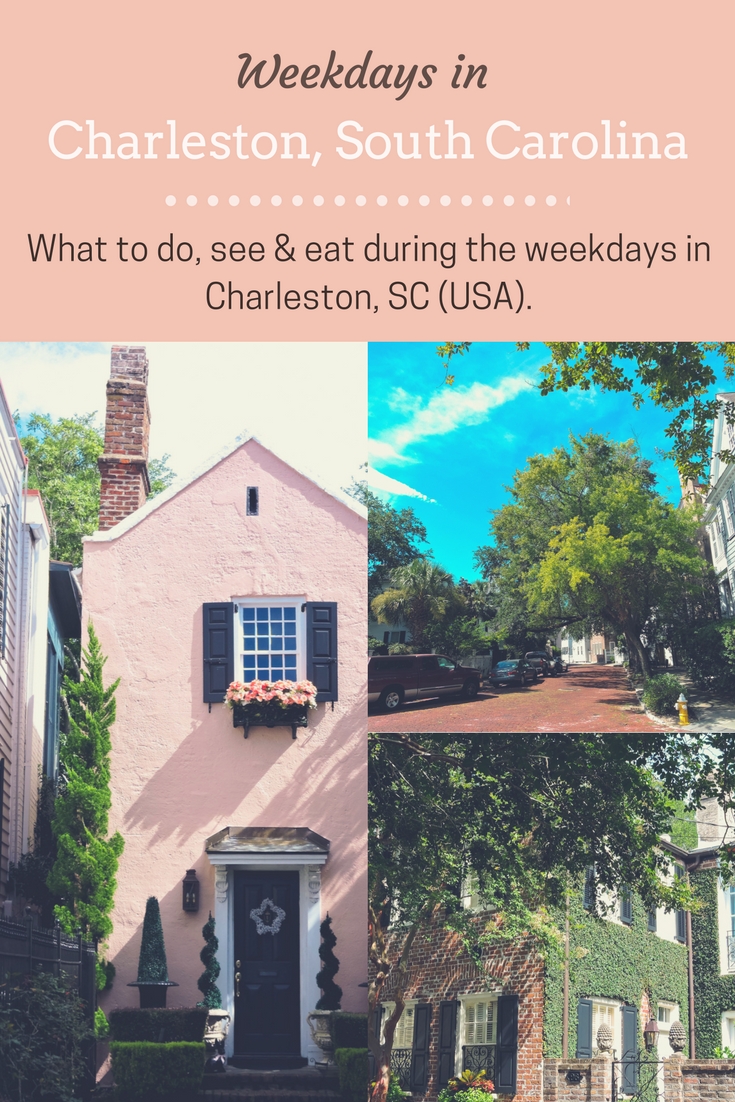